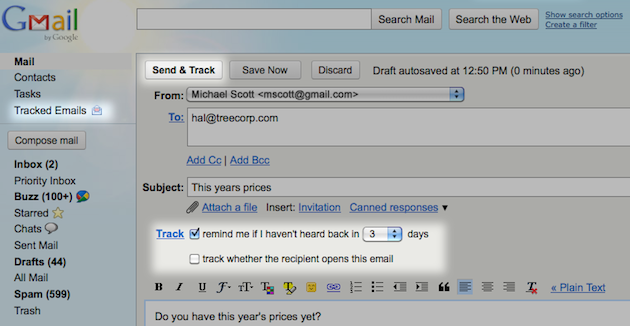 I have fond memories of the old days of dial-up AOL (and no, not just because they’ve acquired us now). I remember thinking how stalkerishly awesome it was that I could see if another AOL user had read the email I had sent them, if they hadn’t replied yet. Then the Internet had to come along and ruin everything. But wait, a nifty startup just popped onto my radar which brings that functionality to Gmail.

EmailOracle is going to seem like a nightmare to some people at first glance. But it’s actually really cool — and smart. The service, which is a browser plug-in, augments Gmail to make it easy to track any message you send, get analytics on it, and send yourself reminders about the email if you don’t hear back in a set number of days.

How does this work? It’s simple really. EmailOracle inserts an image into each email you send. When that email is opened by the recipient, a call is made to EmailOracle’s servers to get that image. And this lets them know the email has been opened. They then send that information to you by way of a dashboard that is built into Gmail thanks to the plug-in (or on their site).

It’s a nice little trick that MailChimp and other mail-tracking services use as well. But MailChimp and the rest are mainly geared towards email marketing. EmailOracle is going right after individual users.

The service includes a base, free layer which allows you to track up to 20 emails a month. People who wish to track more can sign up for the Basic, Deluxe, or Pro accounts which cost $9.95, $19.95, and $99.95 a month, respectively. Each tier gives you access to a higher number of tracks per month (Pro goes all the way to 10,000), but Deluxe and Pro services also allow you to have customized signatures. This means you could do a 1 by 1 pixel image for the tracking — meaning it would be basically invisible to recipients.

That last bit may be a little unnerving to some. After all, I think we all lie from time to time about not having read an email when we actually have. But EmailOracle does allow for opting-out of this tracking if you click on the image in the email you receive. But again, if that’s a 1 by 1 pixel image, you’re probably not going to see it.

We take privacy and security seriously. We never store anyone’s emails on our servers, only the minimum information needed to provide email metrics (only information found in the email header, only for those emails on which the user requests metrics). We also use Gmail’s OAuth feature so that we never store any passwords, and we use SSL encryption so that no one can eavesdrop on the user’s tracked emails as we display them to him or her.

Aside from the tracking ability, the reminder notifications are very useful too. Overall, this seems like a very useful add-on for Gmail. And maybe the best one ever depending on how creepy you are.

The EmailOracle team was nice enough to offer 500 TechCrunch readers 200 additional tracks a month for free if you sign up with the code TECHCRUNCH1010.

Your “I didn’t open your email yet” excuse just went extinct.