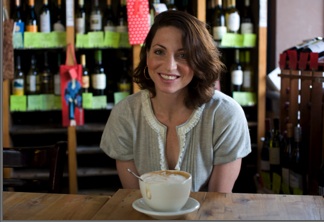 Editor’s note: The following is a guest post by Penelope Trunk.

My company, Brazen Careerist, is moving from Madison, WI, to Washington, DC, where our new CEO lives.

Running the company has been absolute hell. Not that I didn’t know it would be hell. It’s my third startup. Each has had its own hell before we were solidly funded, but this one was so bad that my electricity was turned off, and I really thought I was going to die from stress.

So while my company moves its center to DC, I’m staying in Wisconsin. I just married a farmer and my two young sons and I are learning to live among the wonders of pigs and cattle and corn.

I thought I would be sad that the company is moving. It’s weird to be the founder of a company and not be where all the action of the company is. But honestly, I’m relieved.

There is good evidence that you have to be crazy to do a startup. Jeff Stibel, writing in the Harvard Business Review, calls entrepreneurship a disease. Because you are not likely to make money – you are likely to die broke. And you work insane hours – longer than any other job – and you do it over and over and over again. This is not sane.

In fact, David Segal reports in the New York Times that there is a mania that entrepreneurs exhibit that is very attractive to investors. The trick is to make sure you’re investing in someone who is on the border of insane, but not insane.

So I had a going away party. To say goodbye, but also to acknowledge that I am officially not crazy enough to spend another year missing out on being with my kids. There is still an office in Madison, but the company is running well enough that I don’t have to be the center of it.

It’s hard to not be the center, but I want to be the center of my family. There are enough articles in the last year alone to fill a book (not to mention conference panels) about why women don’t get funding for startups. But really, you could tell that story on one page: Startups move at break-neck pace, under a lot of pressure to succeed bigger and faster than any normal company. And women don’t want to give up their personal life in exchange for the chance to be the next Google. Or even the next Feedburner. Which is why the number of women who pitch is so small, and, therefore, the number of women who get funding is small.

Did you know that in Farmville, women make colorful, fun farms, and men make big, sprawling farms? And I don’t think it’s a social pressure sort of thing. My sons are under no pressure from me to beat each other up with anything that they can turn into a sword, which is everything. And the girls who visit are under no social pressure to sit quietly, and watch. Boys and girls are fundamentally different even before they get to Farmville.

Women are under real pressure to have kids, though. They have a biological clock. So women who are the typical age of entrepreneurs—25—need to be looking for someone to mate with. Think about it. If you want to have kids before you’re 35—when your biological clock explodes—then you need to start when you’re 30, allowing for one miscarriage, which is more probable than most young people think. If you need to start having kids when you’re 30, you probably need to meet the guy you’re going to marry by the time you’re 27, so you can date for a year, get married, and live together for a year before kids. If you need to meet that guy by 27, you are very distracted during your prime startup time. (I have done years of research to come to this conclusion. Here’s the post.)

For men it’s different. We all know that men do not search all over town finding the perfect ballet teacher. Men are more likely to settle when it comes to raising kids. The kids are fine. Men are more likely than women to think they themselves are doing a good job parenting. This makes sense from an evolutionary perspective. Men have to trust that the kids will be okay so that they can leave and go get food or make more kids.

Before you tell me there are exceptions, I’m going to let you in on a secret: I’m a magnet for high-powered women with stay-at-home husbands. And when the men aren’t listening, the women always tell me that their men don’t pay enough attention and they (the women) are really running the household. They would never say this to the men. It would de-motivate them. So even the most child-oriented men are not as child-oriented as their wives.

But wait, let’s ask why so many men with kids are doing startups? Why aren’t they with their kids? A startup is like six full-time jobs. Where does that leave the kids? We use social service funding to tell impoverished families that it’s important for dads to spend time with their kids. But what about startup founders? Is it okay for them to leave their kids in favor of 100-hour weeks? For many founders, their startup is their child.

My startup is me and a bunch of twenty-something guys. And if you’re a woman launching a startup, my advice is to stick with this crowd. They never stop working because it’s so exciting to them: the learning curve is high, they can move anywhere, they can live on nothing, and they can keep wacky hours.

The problem with that mix is that someone who is not a guy in his 20’s has different priorities. And that’s something we saw really clearly at Brazen Careerist. The more I became focused on my personal life, the more annoyed everyone got with me. Sure, they understood, but they were pissed also.

I think our new setup will alleviate much of that stress. I’m on the farm, Ryan Paugh is in Madison, and Ryan Healy is in DC. It’s not how I imagined the company evolving when we started it, but that’s part of the fun of entrepreneurship: you never get what you imagined, ever.