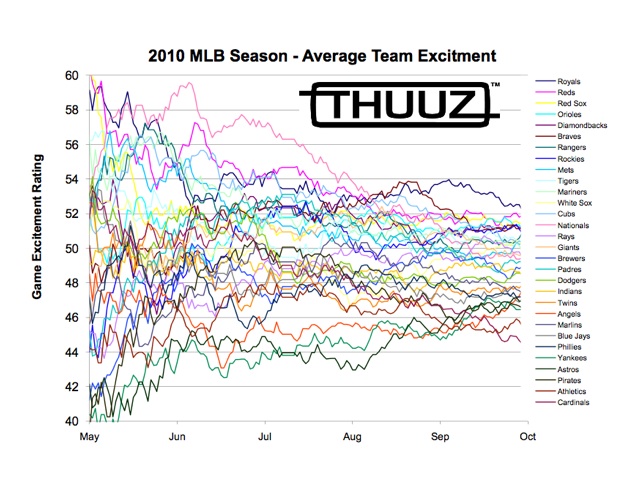 The baseball post-season games started yesterday and, according to a new notification service for sports fans called Thuuz, the most exciting game was the Cincinnati Reds Vs. the Phillies. The Yankees Vs. the Twins was a bit tamer, and the Rangers Vs. the Rays was meh. Thuuz creates an excitement score for each game and sends out alerts via email or text message when games get pass a predefined threshold. The Reds game got a score of 93 out of a hundred, the Yankees game got a 73, and the Rangers game got a low 43.

An analysis based on Thuuz scores during the regular season was used to create the chart above. The Reds ended the season as the second-most exciting team, after the Royals, whereas the Yankees had a pretty boring season. And if you don’t agree, remember, the data doesn’t lie.

The key thing is that the Thuuz score is not the real score or highlights, so if you want to watch the game later on your DVR, you still have a chance to avoid spoiler alerts. It is based on algorithms which look at realtime play-by-play feeds and take into account how close a game is, the pace of a game, and individual plays. Thuuz also suggests how far into a game is a good time to start watching, all of this while trying not to ruin the game.

Thuuz works for baseball, football, soccer,basketball, and hockey, with more sports on the way. It seems to do a decent job capturing the excitement around a game. For example, here are its scores for recent college football games. Thuuz was founded by Warren Packard, a venture capitalist at Draper Fisher Jurvetson who has stopped making new investments. 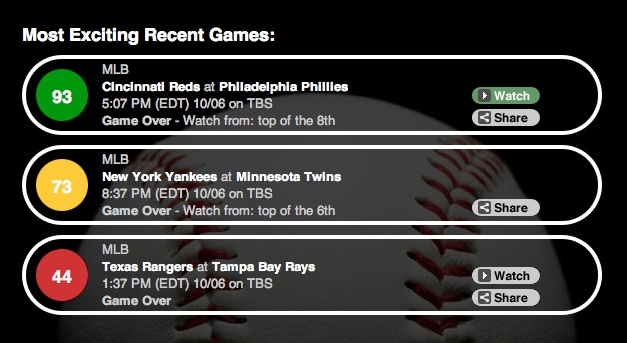