Between sites like Groupon, LivingSocial, and countless clones, at any given moment there’s bound to be a few great deals going on in your neck of the woods. Unfortunately if you want to capitalize on as many of them as possible, you’re going to wind up with a pretty overstuffed inbox. That’s where Yipit‘s deal aggregation comes in: the site will send you a single email that aggregates a half-dozen deals from services like Gilt Local and Groupon, so you can quickly find the ones that suit you best. The company was founded in late 2008 (we’ve covered it a few times since) and today it’s confirming the details of a $1.3 million funding round that it closed over the summer.

The investors on the deal are SV Angel, RRE Ventures, DFJ Gotham, IA Ventures, Mike Yavonditte (Quigo), Jason Finger (SeamlessWeb), Josh Stylman and Peter Hershberg (Reprise Media), Ben Sun, Ed Sim and Alex Zubillaga. News of the funding was first reported by Silicon Alley Insider back in June based on an SEC filing; the company has now confirmed the amount and the list of investors.

Depending on the city, Yipit can pull together dozens of available deals, but it typically only presents a handful of them based on your personal preferences (you check off what kinds of deals you’re interested in during the site’s brief signup process). However, if you don’t like any of Yipit’s daily suggested deals, you can still view a full list of them on Yipit’s website.

Yipit is in an interesting position. The need for deal aggregators is obvious given how many deal sites are out there, but it’s inevitable that this market is going to see consolidation and most of the clones will die off. Groupon, which is the clear leader in this space, recently launched deal personalization to help speed this process (it can now target an infinite number of businesses — it was limited to two daily deals per city before this). But even if the clones fade, sites like Yelp and Gilt Local, which both recently got into this space, aren’t going away any time soon. Which means there’s still going to be plenty of deals for Yipit and its ilk to aggregate. 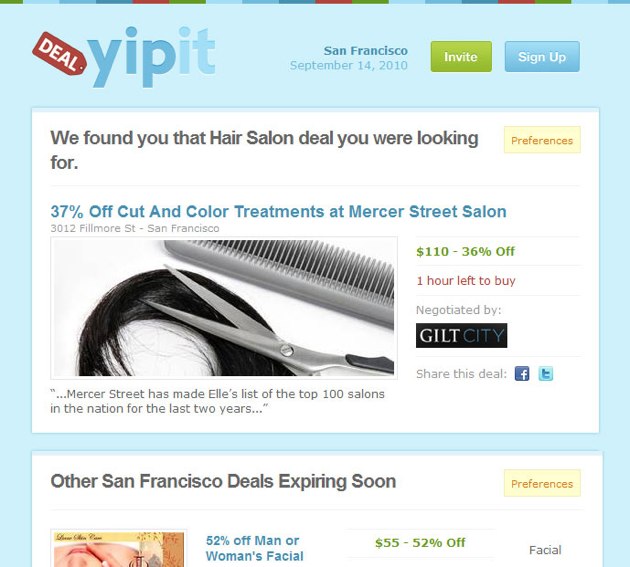