Located on a nondescript block in San Francisco’s Mission district is HipMunk HQ, a simple townhouse with a dark green trim. The travel startup’s operations are concentrated in just the first two rooms on the first floor— the rest is living space for Hipmunk’s co-founders, Adam Goldstein and Steve Huffman, formerly of Reddit. The approximate 300 square feet is more than enough space for the fledgling flight search engine, which is made up of three full-time employees (including the co-founders) and a couple of part-time workers.

The idea is to outgrow the space as cash trickles in from the site’s flight purchases (according to the team, they’ve been technically profitable since their August launch) and their latest angel round, a $1 million pool backed by investors like Ron Conway’s SV Angel and Paul Buchheit.

As initially reported and later confirmed by Huffman, the last round of financing was highly competitive with “dozens” of prospective investors vying for the Y-Combinator startup. Many gave up when they saw the higher than average valuation (greater than $4 M, less than $10 M) but as evidenced by the final roll call, more than a few were ready to sign the dotted line.

So why the fuss? Why do we care about a stylish, ambiguously hip-ster(?) chipmunk with an obnoxiously adorable periwinkle scarf? TC TV dropped by 75 Sharon St. to find out.

For starters, the “Hipmunk” mascot is a product of Goldstein’s imagination, borne more out of necessity than whimsy. Like many startups in today’s Silicon Valley, Goldstein was struggling to find an apropo domain that was topical and more importantly, available. After dangerously flirting with (and even purchasing) domains like BouncePounce.com and Trot.me, Goldstein’s girlfriend told him to identify a cute mammal that he could build a brand around. Hipmunk fit the bill.

The site itself is designed to be the kernel of a fully formed travel search engine—- when and if Goldstein and Huffman get around to launching new verticals for accommodations, rental cars, international editions, etc. Although much attention has been paid to the visual nature of Hipmunk’s search results— all the results for a query appear on a one-page graph, optimized for the shortest and cheapest flights and color-coded by airline— the founding team says the site is not designed to be a visualization of travel search, just intuitive. Thus the upcoming verticals may look radically different than the flight category but all will follow basic principles of logic, something Goldstein and Huffman say has been largely deficient in this industry.

Borrowing a mantra he used at Reddit, Huffman says Hipmunk’s goal is to be, in two words, “not horrible.”

However, in order for Hipmunk to be “not horrible,” the site will have to quickly expand its database which currently only includes flights from Orbitz.

For a site that aims to reduce agony, and even includes an “agony” button, the last thing a consumer wants is to feel compelled to use Hipmunk in tandem with other sites to compare prices and features.

That hasn’t been an easy battle but doors are opening as Hipmunk’s hype builds.
In fact, when Hipmunk was just starting out, Orbitz was the only one to take their call— many of the traditional carriers ignored Hipmunk or delayed discussion (likely jaded by the slew of travel startups that have emerged in the last decade, all promising to be the next Expedia).  Now, according to Goldstein, they’re taking his calls and Hipmunk is on track to roll out several new partnerships later this year. The team is also renegotiating terms with Orbitz thanks to the steady rise in sales (to date, Hipmunk users have completed “millions” of dollars in ticket sales, according to the founders). Currently, Orbitz pays Hipmunk the standard rate of $3 per flight sold.

Here’s a quick video on the origin of Hipmunk: 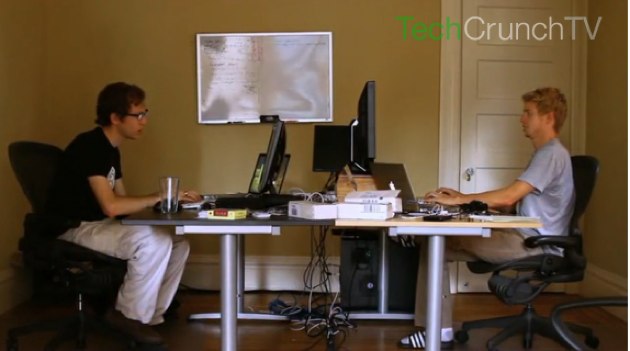