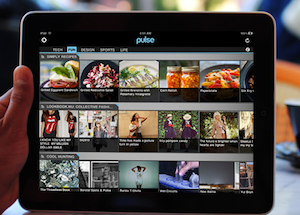 Something tells me the venture capitalists are just about done having their lunch eaten by the “super angel” crowd. This morning we wrote about Hipmunk raising a $1 million angel round, but the super angel usual suspects (other than SV Angel) weren’t part of the deal. Lots of individual angel investors were, though.

And this afternoon we’ve confirmed that Alphonso Labs, creator of the popular Pulse iPad/iPhone news reading application, have closed a first venture round of their own. It’s angel size – around $1 million – but the entire round was taken by established venture firms.

The investors: Redpoint Ventures, Greycroft Partners, Mayfield Fund and Lightspeed Venture Partners. There’s an additional fund, we hear, but we haven’t been able to confirm who it is.

And the deal terms – wow. This is a pure convertible note, we’ve heard from multiple sources, with no cap on valuation. That means the investment turns into equity when the company later raises a much larger round. Angel investors generally despise convertible notes because they are so entrepreneur friendly. And convertible notes without valuation caps are nearly unheard of these days. In fact, convertible notes were a big part of the Blogger Walks Into A Bar post I wrote a couple of weeks ago.

This behind the scenes stress in the investor community continues to be the most interesting tech story right now. The clear winners are the startups, who benefit from very easy terms on money right now. I’ll write more later today on where I think this is going. Until now, cheers to Alphonso Labs.