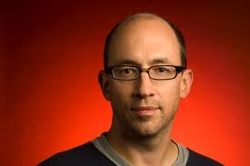 In a post on the matter, Williams writes the following:

The challenges of growing an organization so quickly are numerous. Growing big is not success, in itself. Success to us means meeting our potential as a profitable company that can retain its culture and user focus while having a positive impact on the world. This is no small task. I frequently reflect on the type of focus that is required from everyone at Twitter to get us there.

This led to a realization as we launched the new Twitter. I am most satisfied while pushing product direction. Building things is my passion, and I’ve never been more excited or optimistic about what we have to build.

This is why I have decided to ask our COO, Dick Costolo, to become Twitter’s CEO. Starting today, I’ll be completely focused on product strategy.

It was only a little over a year ago that Costolo joined Twitter as COO. Previously, he had been at Google after the search giant bought his company FeedBurner back in 2007. While he clearly didn’t need the money, Costolo noted that he was joining Twitter because he thought the company had the opportunity to become one of the big world-changing companies. Now he’ll get a chance to lead it.

As COO, Costolo has been integral in Twitter’s attempt to make money. Efforts to do just that seem to ramp up everyday. And Costolo has been able to help Twitter bring aboard an impressive roster of talent. In Williams’ post, he mentions: Ali Rowghani, Adam Bain, Mike Abbott, Katie Stanton and Kevin Thau. All but Thau came aboard after Costolo.

Williams notes that Costolo has been a CEO three times before in his career, so he’s confident the transition will be a smooth one. Of course, this is also the second CEO change for Twitter as Williams himself took over from creator Jack Dorsey almost exactly two years ago.

Twitter tells us that Williams’ title will now just officially be “co-founder” and that he’ll be focusing on product strategy and vision. It’s worth noting that with the New Twitter roll-out, the company made it very clear that the product was mainly the brainchild of Williams. While that’s undoubtedly true, they were also undoubtedly setting up the company for this transition.

I love working with Evan Williams. During his tenure as CEO, Twitter has gone from 20 employees to 300, from three million registered users to more than 165 million, and from 1.25 million Tweets per day to 90 million today, and he’s done all this while keeping Twitter’s unique culture intact. I completely respect his decision to focus on product strategy and vision. As we’ve all see with the new Twitter, when Ev focuses on product, something amazing can happen. I’m certainly excited to be taking on this role. You couldn’t ask to take a job like this at a better time – the team is incredible, we have awesome stuff in the pipeline, and we’re ready to accomplish more in the next two years than we’ve accomplished in the last four.

And: Meet The Management: Twitter Clarifies Just Who Exactly Is Running The Joint Now