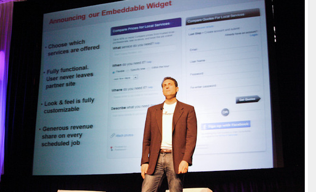 Fresh off a $7.4 million funding round, last year’s TechCrunch50 winner Redbeacon took the stage at TechCrunch Disrupt today. The company announced that it has expanded to its second city; Seattle. Redbeacon was previously only available in San Francisco (and has over 5,000 Bay Area providers listed on the site).

Redbeacon lets users search, browse and book local service providers – from plumbers to bakers – on its website. Service providers pay a fee to Redbeacon for new paying customers, or in some categories, like lawyers, for a lead.

In conjunction with the expansion, Redbeacon also debuted a widget that allows third party websites to embed core Redbeacon features into their sites, allowing visitors to sign up for services within another site. The widget includes all of the functionality as the site, letting visitors choose their particular service in their geographic area, select a date for delivery or meeting and more.

For publishers, Redbeacon will pay a share of revenue generated from those customers. Publishers can also customize the look and feel of the widget. Partner sites can even specifiy certain types of jobs that can be booked through the widget as well. Redbeacon already has a number of launch partners, including NBC Bay Area’s local TV site as well as a Fox affiliate in Seattle that will be including the widget on their websites.