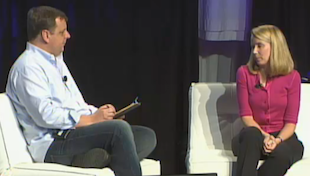 Today at TechCrunch Disrupt in San Francisco, Google’s Marissa Mayer took the stage to talk with our own Michael Arrington. But before her talk she had a couple new things to announce. Specifically, new things about the recently-announced Google Instant.

Mayer invited a couple Google employees up on stage to show off a couple new Google Instant features. One allows you to use keyboard navigations with the service. The other brings Instant features to other search verticals — like video and news search. These features will be rolling out of the next couple of days, Google says.

“Google Instant makes your searches two to five seconds faster,” Mayer noted based on Google’s study of users. In aggregate, this represents a huge amount of time saving for Google users, Mayer said.