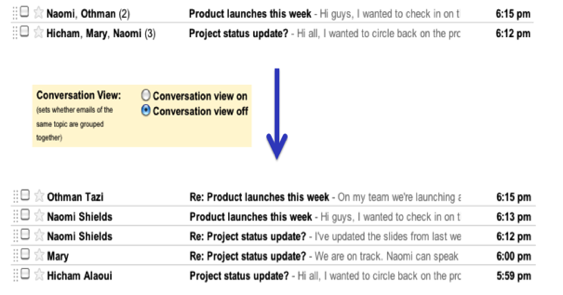 Threaded emails in Gmail is a controversial subject. Some say that the automation of drawing emails together within Gmail saves them the time of figuring out which emails are connected. Others find the feature complicated. What it comes down to is either you love the way Gmail clusters conversations together, or you hate it. Today, Gmail is giving people the option to turn on threaded conversations or mute the feature completely.

Within setting, you’ll be able to toggle off conversation view to see email as individual messages in chronological order. Some actions commonly associated with unthreaded email can be accomplished with searches in Gmail.

Google says that the feature will make the transition easier for former users of ‘legacy solutions’ (i.e. Microsoft Outlook, Lotus), who aren’t used to the threaded conversation view. Now business Google Apps customers will have an “enable pre-release features” in the control panel to turn threaded conversations off.

While Google consistently provides us with small, useful features in Gmail, this is probably going to be one that many users might actually make an effort to use.