You may not have heard of GreenDot, a $2 billion public company, but you’ve seen their products everywhere — they’re largely responsible for the pre-paid credit cards that litter retail outlets around the country. Last night, we wrote a look at Green Dot’s past, and for good reason: today at TechCrunch Disrupt, Green Dot founder and CEO Steve Streit and celebrated Sequoia Capital Partner Michael Moritz took the stage to talk about Green Dot, entrepreneurship, and what makes Moritz such a successful investor. Our own Michael Arrington moderated.

The discussion kicked off with a brief history of Green Dot. Streit recounted how he had started the company in his home over a decade ago, when he decided he wanted to give young people a way to buy things online (online purchases generally require the user to have a credit card). Streit says that at the time, these cards were called “host-based stored value cards”, which isn’t exactly a marketable product to consumers. As Streit described this product idea to friends, they’d respond “oh, like a pre-paid phone card” — and thus the term “pre-paid credit card” was born. And it obviously worked: at this point, consumers are holding onto pre-paid cards worth something between $2-400 billion in value. 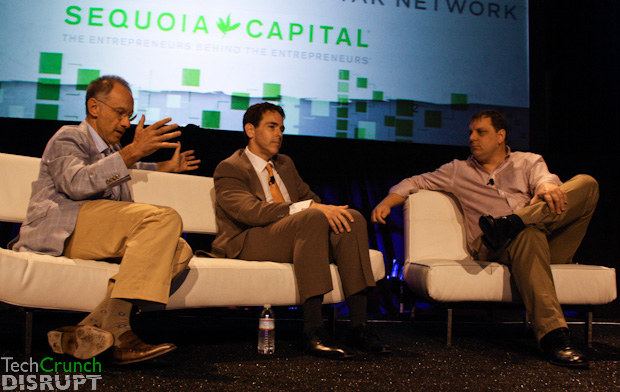 The conversation then shifted to  Moritz, who led Sequoia’s investments into Green Dot and whose other investments include the likes of Google, Yahoo!, PayPal. Streit says that Moritz doesn’t tend to speak much at board meetings, but when he does, “it’s helpful and impactful”. Most of Mortiz’s value comes outside of the boardroom — he offers the guidance and experience of someone who has been there many times.

Streit recalled the lengths Moritz went to help secure Green Dot’s success. When Green Dot had to transition from running as a startup to a holding company, which introduced far more federal regulation and would restrict Sequoia’s control, Moritz said “Yep, yep, got it — what’sever best for the business. Gotta run, bye.” “Despite the fact that Mike has money”, Streit says, “he identifies with the underdog and common man more easily than uncommon man.” When Green Dot would get acquisition offers, Moritz would say, “Don’t you dare. Take a vacation, and stay at it.”

But how does Moritz actually go about choosing these future winners? Moritz says that “there are a few things in the most wonderful founders that we’ve had the good fortune of being in business with. They’ve shared several traits: burning desire to do something. It’s obvious that they’re on a mission and want to do something different. And it’s comprehensible that they can inspire other people.”

Moritz went on to say, “Look at the very great companies that have been built in America, and the founder has started it in their garage or bedroom and have developed that company for years, five years, a decade, even multiple decades. And the person who was there in the garage is still at the company… Do you know that for certain when you invest? No. But you have glimmers, and hints, and whispers”. Moritz was quick to add some modesty to his observations, “We’ve also made lots of mistakes along the way”.

Streit closed out the discussion by giving entrepreneurs a piece of advice: if you ever hit a big rut, think back to America’s founders — he took a trip to Constitution Hall when he has feeling especially depressed about the business. He says he sat at those desks and saw names like Jefferson and Washington and thought about the risks they were taking, which sort of put everything in perspective. America, he says, is ultimately a startup.

Streit also offered one tip for anyone else who has Moritz on their board: when he starts making an exasperated-sounding “pfft” sound, it’s time to move to the next topic.