Meet GameCrush, a startup that manages to sound both ridiculous and very promising at once. The gist: take the millions of male gamers out there and offer to hook them up online with a gaming buddy of the opposite sex for a fee. Or, as founder Eric Strasser put it, “if you can buy a girl a drink in a sports bar, why not buy her a game online?”

Once a guy has found a profile he likes, he can message the PlayDate and see if she’s interested in playing a game with him (video chats are encouraged). GameCrush has a small library of multiplayer Flash-based games integrated into site, and users can also coordinate a meetup in another gaming environment.

So what’s in it for the PlayDate? GameCrush charges gamers (who are usually men) 60 cents a minute to use the service, and it does a revenue share with both the PlayDates (usually females) and the developer of the game they’re playing. In other words, women can earn money by playing video games with men. GameCrush will also allow men to earn money as PlayDates, but the demand for men-for-hire is significantly lower at this point.

GameCrush has been in private beta for months and has already drawn investor attention and it’s now open to the public. 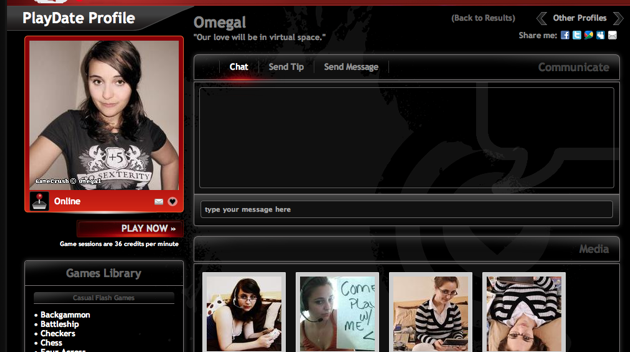 JS: Another reason to be a terrified mother of a teenager. That said, huge market. Interested to know of 10k beta users, what’s the ratio?

A: We heavily restricted. Only about 3000, 7000 Playdates (I think this means females). Playdates can be male or female.

A: Chatroulette failed because it’s anonymous. Game community is more respectful than you’d imagine (Jason’s note: false). Can block Ip address. If someone disrespects anyone they get flagged/kicked off.

A: Charge 60 cents a minute to use the service. Rev share with PlayDate community, which is why they are playing online. So a woman can go on, play with gamers and gets a cut. Adult sites are about 7 minutes, you can imagine why. Our sites, because they’re playing 3-4 hours. If we keep clean can target military, univirisites.

JH: First place my mind went when I saw call to action to developers. I wonder what the developer ecosystem is.

A: Beauty of our model is that we do standard rev share, we’re talking about games that are intimate gaming experience with 2-4 players. We can be lucrative for a developer.

Mobile?
A: Challenge is small interace, so you can’t have webcam next to game but there’s an opportunity there.