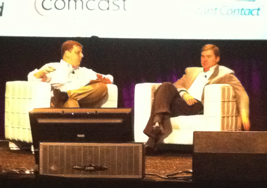 Bradley says his group, which is in charge of a $40-plus billion revenue stream including PCs, printers and more, was in charge of buying Palm. Bradley’s main goal now, is how to broadly deploy the WebOS, the mobile operating system for Palm phones. Next year, for example, Palm will sell 15 million printers that use WebOS. He says that while the smartphone category is growing, tablets are going to be a huge market. He estimates that in the next few years tablets will be a $40 billion market (he also said that the smartphone market is a $100 billion market). HP of course, is looking to be a part of this market with its own iPad competitors.

The strategy with webOS is not just the OS but it’s also to have a consistent interface from phones to tablets, says Bradley. He adds that the main reason HP acquired Palm was for the WebOS. Bradley adds however, that Palm will not license iOS, as Google has with the Android platform.

And Bradley says that the platform is growing. For example, there are 50 percent more apps using the mobile platform than before Palm was acquired. ‘We are aggressively pushing more SDKs, bringing developers onto WebOS platform, which is the second largest 3d gaming platforms.”

Arrington asked Bradley if HP’s is trying to adopt Apple’s strategy that the company implemented with its iOS platform. Bradley said that HP is definitely NOT trying to emulate Apple or Dell. Addressing the massive 3PAR acquisition (which closed today, says Bradley), he said that the company’s data storage offering will no doubt allow HP to innovate in the cloud.