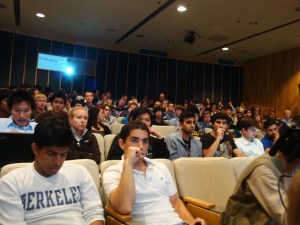 Instead of another boring lecture, last week my students at UC-Berkeley got quite a treat: a lively discussion with TechCrunch founder Mike Arrington. I once described Mike as a cross between Oprah Winfrey and Howard Stern; so I was ready for a little controversy. But he ended up lighting such a big fire, that I’ve been bombarded with questions from students about their education and careers. The questions aren’t just coming from Berkeley; after the discussion was posted on TechCrunch, students at Duke asked me to discuss this at a keynote I am giving at their entrepreneurship symposium on Wednesday; and students at other schools, from as far as India and Singapore, have asked for advice.  So I’ll just respond here in the hope of quenching this fire.

At the UC-Berkeley Distinguished Innovator Lecture Series, last week, Mike and I discussed a variety of topics.  We agreed on most subjects—except on the importance of education (and dearth of women in tech—which is a battle I’ll fight another day). When I brought up my TechCrunch post on the importance of MBA degrees, Arrington questioned why students needed to get any degree or go to college at all.  He talked up the success of tech CEOs who had dropped out of college—Zuckerberg, Gates, and “countless high-profile entrepreneurs including Larry and Sergey” (Mike: Larry and Sergey both have undergraduate degrees and were completing PhD’s). Despite being interrupted by Berkeley professor Ikhlaq Sidhu (who I was afraid would come on stage and strangle Mike before he could finish his sentence), Arrington said that he didn’t learn much from college; gaining admittance to a Berkeley or Harvard is the only certification a student needs; dropping out from college doesn’t carry a stigma anymore; so “the best thing in the world is to go to Harvard for a year and drop out because everyone knows you were smart enough to get in”.

Arrington told students that the kind of person who wants to increase his chances of success by getting a masters degree isn’t an entrepreneur; older entrepreneurs have no chance of raising money (so they’re a lost cause); success means building a billion dollar business and making a lot of money—it’s not good enough to build a good lifestyle business that pays the bills and brings you happiness. So they should “ready-fire-aim” and go for the big prize rather than thinking small.

Here is the problem with Arrington’s logic: students may come up with great ideas and start a company, but they aren’t going to be able make it big unless they have the educational foundation. Maybe Zuckerberg lucked out by being at the right place at the right time, but he wasn’t born with the knowledge of how to grow a business. To build a business, you need to understand subjects like finance, marketing, intellectual property and corporate law. Until you have been in the business world for a while, you don’t know how to negotiate contracts, deal with people, manage and nurture employees, and sell to customers. Most importantly, if students don’t learn the importance of finishing what they start, they will never achieve success—this requires perseverance and determination.  And by dropping out of college, they won’t have the alumni networks that they need to help them later in their careers and in business.

The harsh reality is that for every Zuckerberg, there are a thousand who drop out of college and fail. Many get discouraged after their failures and move to other professions which require less skill and education. Some universities do readmit students who dropped out for a short period of time, but most students end up burning through their savings and loans from friends and relatives, and can no longer afford their education. Some give up and look for jobs in big companies, but big companies don’t generally hire people without degrees—because they want employees who have the discipline to finish what they start; who won’t jump ship and chase every rainbow.

Plus, if you look at the backgrounds of the people who actually built Facebook—the executives and employees of the company—you’ll find that they aren’t college dropouts; they are highly educated. Facebook, Microsoft, and Apple—all started by college dropouts are the most selective in hiring; they are the most fussy about degrees.

My advice to students is to get all the education they can, while they can. Complete at least a bachelors and get a masters degree if you can. The degree doesn’t have to be from an elite college like Harvard or Stanford; any education will carry you far. 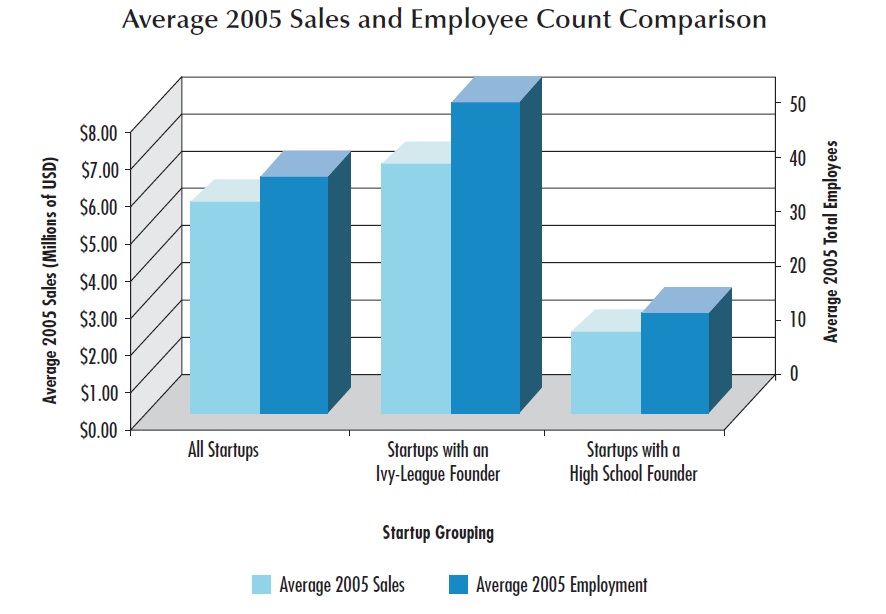 As this chart shows (based on an analysis of the backgrounds of the founders of 652 successful technology companies), there is a huge difference in the size and revenue of companies founded by people with college degrees. But there is only a small difference between those with ivy-league degrees and the average (which includes all startups).

After you graduate, you should gain some practical work experience and learn the realities of the business world before making the plunge into entrepreneurship. Work for a big company for a few years; learn about how the corporate world works; get good at people management, project planning, and teamwork. Then join a startup—which will probably fail as most startups do. But you get to fail on someone else’s dime and learn all the valuable lessons.

In his talk, Mike Arrington said that he got little from his education.  He also said that he wished he had gotten an MBA instead of a law degree.  But what Mike didn’t seem to acknowledge was that he needed the law degree to become a lawyer; when he was a lawyer, he gained an in-depth knowledge about the tech world and its problems —which led to his startups; and this education gave him the knowledge to take on unethical companies and question unethical practices—all of which have helped make TechCrunch the world’s leading tech blog. Does anyone think that Mike would have been able to build TechCrunch if he was a college dropout?

In our discussion, Mike joked that instead of doing the law degree, he wishes he had learned to play the guitar in junior high—“maybe he would have become a rock star”. I have no idea if Mike has any musical talent, but a smaller proportion of guitarists become rock stars than techies who become CEOs.