Built by former Scribd developer Ed McManus, Facebook “Like” aggregator TheLikestream launches today after six weeks of work. Capitalizing on the waning appeal of Digg post-redesign and the popularity of the Facebook “Like” button, the site is a Digg clone but instead of “Diggs” it tracks Facebook “Likes.”

“Today that kind of bit me in the … when Facebook went down” says McManus referring to Facebook’s recent and uncharacteristic outages.

Any time a user hits the “Like” button on the site, that vote gets inserted into the user’s Facebook stream, immediately landing on the homepage. There’s no upcoming section.

In order for a user’s vote to be counted, they need to register through Facebook Connect on the site. There are also three different ways to submit stories to TheLikestream; Through a bookmarklet, directly sharing a URL on the site or through the  onsite page builder, where you can drag and drop html components as well as flash widgets. Based on feedback McManus is getting from users the onsite page builder seems to be user’s favorite way to submit stuff to the site.

Using the same time decay algorithm as Reddit, as time passes a TheLikestream-ed story needs to get more “Likes” in order to stay in the stream, favor being given to those more recent stories.

Already I can see a scale problem, reducing the “Digg effect” of a high trafficking homepage, if the site starts amassing stories with hundreds of “Likes” and positions them against recently submitted content. McManus responds that because of the small number of “Likes” that is not an issue currently but he will take it into consideration,“Content that ends up being really successful, i.e. gets a lot of  ‘Likes’ will keep a balance between content that is highly viral and content is more recent, it’s definitely something I will address when there is more stuff on the site.”

When asked about the interesting choice of “The” in the name (just like the proto “TheFacebook”), McManus responded that Likestream.com was taken, “I was actually thinking “The Likefeed” but Facebook doesn’t let you use anything with the word Feed in it on top of the platfrom.” Heh.

According to McManus, the site has already gotten a couple thousand hits on its launch date despite today’s Facebook’s shoddiness.When asked about a business model, “I just want to create something that people like, If I can do that then I can find a way to monetize it later. Sort of like the Valley story I guess.” 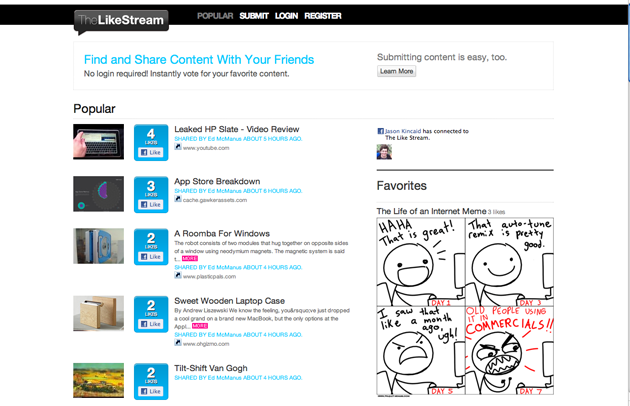