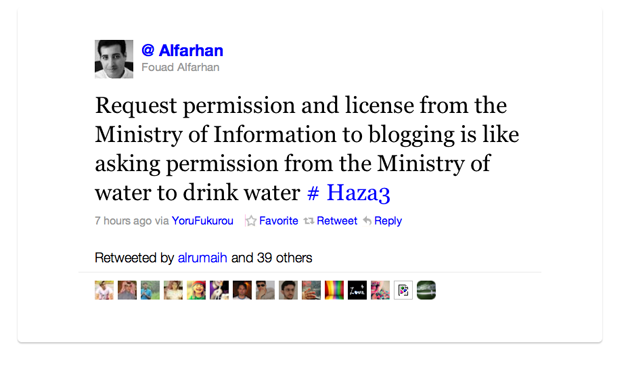 According to The Media Note, Saudi Information and Culture Ministry spokesman Abdul Rahman Al-Hazza announced last night Saudi time that all Saudi Arabian web publishers and online media, including blogs and forums, will need to be officially registered with the government.

Al-Hazza claimed that the measure will cut down on libel and defamation and is not intended to limit freedom of speech.

However Saudi Arabia has a checkered history when it comes to Internet censorship, and old media is currently very regulated. The government heavily controls the few newspapers in operation and traditional journalists can be detained if they cross the line.

While the Saudi government has arrested bloggers critical of Saudi life and censored activist Twitter pages in the past, this is the first attempt at regulating online media as a whole. As blogging becomes more popular, Saudi Arabian authorities are starting to treat it with the same caution and restriction applied to traditional media in the country.

Of course this has gotten many bloggers upset, and people have taken to Twitter to protest, with the hashtag #haza3 which refers to the Ministry official’s last name. Public protesting is illegal in Saudi Arabia.

The regulation has not yet gone into effect and this story is still developing so stay close for updates.

For those curious, you can visit the Saudi Arabian Minister of Information’s official Twitter and Facebook profiles here. 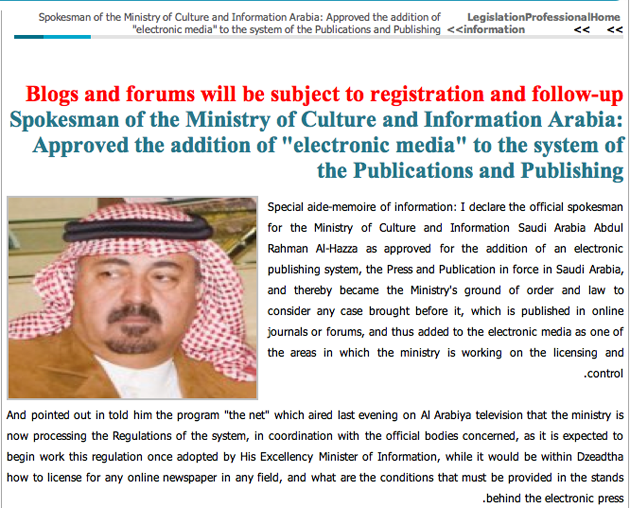