While they’re still only officially saying that the it will launch “later this year”, it appears that Google is taking the steps to get ready for a Chrome Web Store launch very soon. Specifically, a post today highlights that developers can now hook their apps up to Google Checkout merchant accounts (to be able to sell their apps — U.S.-only for the time being), and that there is now a way to preview how your app will look in the store when it goes live.

None of this should be too surprising consider that a presentation in August stated the Chrome Web Store would launch in October. But all the pieces are finally falling into place. While the placeholder space for apps in Chromium (the open source browser that Chrome is based on) keep popping in and out of existence, the Web Store itself seems to be fully functional (it’s a part of the Extension online area).

Google has also posted a set of guidelines for what images developers will need when they upload their app for display in the Web Store. Included here are guidelines for icons, header backgrounds, screenshots, and promotional images (which are optional).

As we’ve previously noted, the main overview page for the Web Store appears to look very similar to Apple’s App Store in iTunes. But today, they’re showing off an example of what individual app pages will look like — it looks simple and obvious enough. See that preview below — look for its launch in the next few weeks. 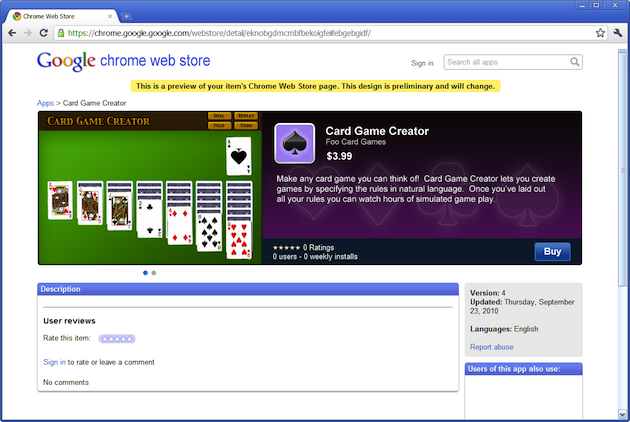