Some days the news is depressing right across the board – natural disasters, murders, heiresses being denied entry to Japan. Other days, thought, it seems like my Google News alerts deliver nothing but joy. Today is a day of the latter kind.

First off came an alert that the New York Daily News’ Orla Healy has been fired from her job.  That’s depressing news for Ms Healy, of course, but fun  news for me as it allowed me to spend twenty minutes photoshopping this owl… 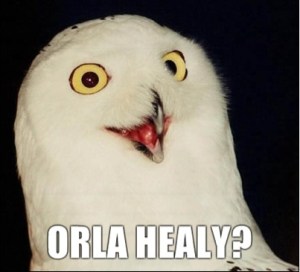 Then came an even more joyful story: the revelation that Tivos and other DVRs are unable to record episodes of CBS’s new show ‘$#*! My Dad Says’ due to the inclusion of non-standard characters in its title.

The naming of ‘$#*! My Dad Says’ (starring William Sh*tner) is the result of an increasingly coy game of Chinese whispers. It started out, of course as ‘Shit My Dad Says’ – Justin Halpern’s Twitter account which currently has just north of 1.7m followers. Then came a book, published by HarperCollins, and the first level of bastardisation (sorry, b*stardisation) to “Sh*t My Dad Says” before finally arriving as a TV show, which CBS insists with a straight face is pronounced “Bleep My Dad Says”.

(As an aside, it’s amazing how many of CBS’s shows can be made to sound much better by censoring just one word: Two and a Half Bleeps; The Big Bleep Theory; How I Bleeped Your Mother…)

With the FCC’s restrictions on televised profanity recently held to be unconstitutional, it would be easy to accuse CBS of cowardice, or at least of trying to have their cake and eat it. Actually though, the network deserves kudos for keeping most of the original name. By doing so they’ve drawn attention to the growing gulf in standards between the websites that a fast-growing number of Americans visit every day and the dwindling amount of traditional media those same Americans consume.

Much like when Random House bought the rights to the blog ‘Fuck You Penguin’ and republished it as ‘FU Penguin’, CBS’s decision shows that traditional media is hovering between two stools (so to speak): clearly they think their audience will be offended en-masse by profanity in a show’s title, but at the same time they’re happy to leverage profanity-laced Twitter accounts like Halpern’s to drive audiences.

It’s a problem that’s only going to get worse as more and more break-out media properties originate online and as ‘digital natives’ grow up to become the mass-market. When their target audience has been watching and sharing clips of goatses and girls bleeping into cups since infancy, TV networks are either going to have to start talking a similar language – sans coyness – or risk becoming irrelevant to an entire generation.

Or to put it another way, sooner or later they’re either going to have to bleep, or get off the fucking pot.