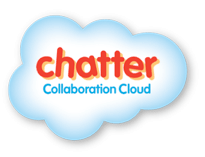 Salesforce Chatter, which was originally announced last November, was launched into public beta in June after four months in private beta. In the realtime collaboration platform’s first three months open to the public, Chatter has been adopted by 20,000 companies; with 25 percent of Salesforce’s client base using the platform.

Chatter was launched as a platform to deliver realtime access to data and information, using social sources, such as YouTube and Twitter. Similar to interactions on Facebook, employees can create business profiles with professional information like personal contact data, area of expertise, and work history. Searching other people’s profiles, colleagues can quickly identify individuals who are relevant to their enterprise needs. Users can post status updates to share communications, files and links around a project, sales deal or customer support case. And users can see realtime feeds of personalized updates from people, applications and documents.

Chatter 2 takes this further, adding a number of new social features that one might see on a consumer-focused social network. The new version includes Filters, which allows them to filter their feeds by people and records they follow to find relevant posts. Chatter Topics allows employees to associate their updates with other posts and comments on the same topic by using a hashtag (#). Combined with Chatter Search, employees can find updates and comments that match any Chatter topic.

Chatter Recommendations give employees suggestions of colleagues to follow and groups to join. Chatter will recommend people based on criteria such as connections in common, number of followers, and management hierarchy. Similarly, public groups are recommended based on their popularity and relevance to that employee.

One important update is Chatter Search, which now gives users the ability to search across every Chatter feed, file, profile, update and comment in realtime. And employees will be able to receive a daily or weekly e-mail digest of the latest Chatter posts from their feed or group feeds.

Now employees can participate in Chatter via an Adobe AIR-powered desktop app, which has all the same funcrionality as the web app. The app, however, will display pop-up alerts at the bottom of the computer screen so employees are instantly notified of updates.

Admins can now create analytics reports and dashboards on Chatter usage in their company across users and their followers, feeds, comments, groups, members, and group comments. And employees can store, update, and share documents, presentations, photos and media files with a designated Chatter File app. Users can also follow reports and receive updated in their feed.

Chatter is free for all paying user subscriptions of Salesforce CRM and Force.com, with Chatter-only user licenses available for customers using Professional Edition, Enterprise Edition or Unlimited Edition for $15 per user. Chatter is also releasing mobile apps for BlackBerry, iPad, iPhone and the new iPod touch are currently scheduled to be available in late 2010. Chatter Mobile for Android devices is currently scheduled to be available in the first half of 2011.

While Salesforce co-founder Marc Benioff has been quick to denounce Chatter as an enterprise social network, it sure looks and feels like one. And with this release the company has been open about taking features from Facebook, Twitter, and other social networks and applying them to Chatter. Kraig Swensrud, VP of marketing, tells me that “Chatter 2 is heavily inspired by Facebook and Twitter.”

Clearly features like recommendations, a desktop app and or the addition of hashtags are ways to make the platform seem more like the networks, i.e. Facebook and Twitter, that employees socialize for their personal relationships

Chatter, says the company, is the fastest growing product in the history of Salesforce. Earlier this spring, Salesforce launched an app marketplace for Chatter, called ChatterExchange. Now there are over 55 apps on the app exchange, says Swensrud

As Benioff states: “The momentum behind Salesforce Chatter is astounding…The excitement we see from the industry and our customers is proof that the feed is the new desktop.”

Of course now that Chatter is officially a social network (or at least looks like one), it will also face competition from the other players in space, which include Yammer, Jive, Bantam Live, SocialText, and SuccessFactor’s CubeTree. 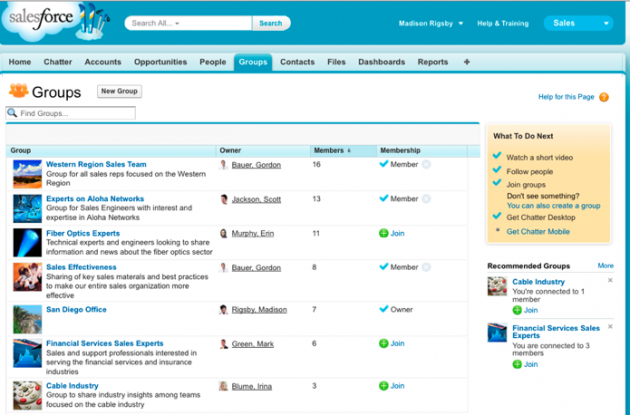