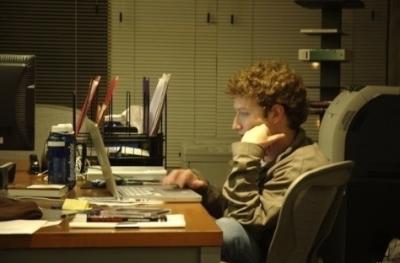 More instant messages and emails have surfaced from the early days of Facebook, adding some more color, but few new major details, to the contentious relationship between Mark Zuckerberg and one of his Harvard co-founders, Eduardo Saverin. The IMs and emails were published today by Silicon Alley Insider, which also published much more inflammatory early Zuckerberg IMs last May, including the famous IM where a young Zuck calls the first Harvard student users of TheFacebook.com “dumb f@%ks” for trusting him with their personal information.

This set of IMs deal more with the break-up of Zuckerberg’s business relationship with Saverin, a wealthy fellow Harvard student who put in the first $15,000 into a joint bank account to pay for TheFacebook.com’s servers and handled the business side of things. He eventually got cut out of the company (although he is still one of its largest shareholders), and began spreading tales about Facebook’s early days which turned into Ben Mezrich’s mostly-fictional book the Accidental Billionaires and, now, the movie The Social Network. While the book and the movie portray Zuckerberg as an evil nerd, the actual history is more mundane. The new SAI IMs even make Zuckerberg look more sympathetic than Saverin.

For instance, in one IM exchange which took place between Zuckerberg and another friend in January 8, 2004, the friend called Saverin a “sucker” for paying for the servers. But Zuckerberg didn’t take the bait, instead he shrugged it off, admitting he didn’t really know anything about business:

Zuckerberg: Eduardo is paying for my servers.

Friend: A sucker born every day.

Zuckerberg: Nah, he thinks it will make money.

Friend: What do you think?

Later, once Zuckerberg, co-founder Dustin Moskovitz, and the early team moved to Palo Alto for summer break while Saverin decided to get a job at Lehman Brothers in New York City (where he was also selling ads for Facebook), the tension between the two began to mount. In one email, Zuckerberg chided Saverin for starting a separate Web job board project on the side and having the gall to advertise it on Facebook:

You developed Joboozle knowing that at some point Facebook would probably want to do something with jobs. This was pretty surprising to us, because you basically made something on the side that will end up competing with Facebook and that’s pretty bad by itself. But putting ads up on Facebook to advertise it, especially for free, is just mean.

Zuckerberg re-incorporated Facebook, which effectively diluted Saverin’s ownership position and allowed Facebook to progress without Saverin’s signature for every financial decision. Finally, in an IM with Moskovitz, Zuckerberg defended his decision to remove Saverin from any operating role at the company because he thought Saverin was doing a lousy job:

I maintain that he fucked himself…He was supposed to set up the company, get funding, and make a business model. He failed at all three…Now that I’m not going back to Harvard I don’t need to worry about getting beaten by Brazilian thugs.

The falling out between Saverin and Facebook has been well-documented before in books like Accidental Billionaires and David Kirkpatrick’s more-accurate The Facebook Effect . But don’t cry for Saverin, he still owns about 5 percent of Facebook, which will probably end up making him the most accidental billionaire of all.