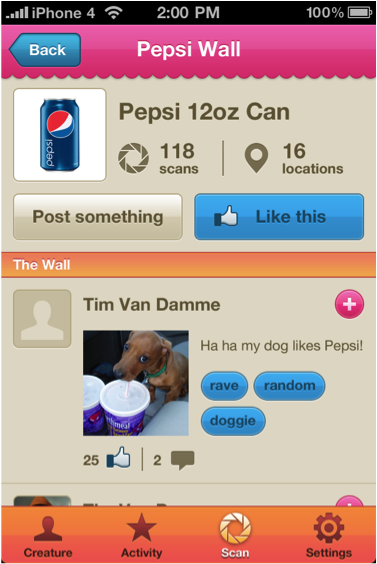 When stickybits launched at the SXSW conference last March, it was conceptually intriguing but a bit too vague in its open-endedness. With the stickybits iPhone app, you can append a message, photo, or video to any barcode. The next time somebody scans that barcode, your message will appear. The problem is that nobody scans barcodes without a reason.

The next version of stickybits, which is coming out in October, aims to give people more reasons to scan and share their scanned objects by honing the product and making it into more of a platform for unlocking rewards and coupons. Stickybits wants to reposition itself as an app for object check-ins.

The new app, V2, will offer brands and businesses four ways to create object check-ins: coupons, group deals, location, and product combo rewards. The first one is just a regular coupon. You scan a product’s barcode and get a discount off your next purchase. The others are more creative. A group deal is requires you to get a certain number of your friends to scan the same item in order to unlock a reward. (Get 5 more friends to scan a Pepsi before 5PM today and win 2 free movie tickets to any AMC theater”). Location-based rewards are only unlocked when a product is scanned at a specific place (“Scan a can of Pepsi in Times Square”). The combo deal tries to get people to scan multiple items—for instance, five different flavors of the same drink. 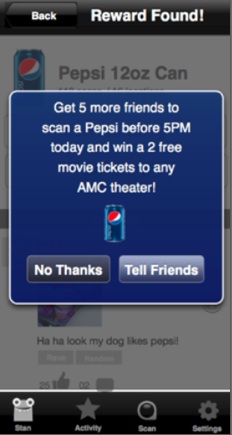 These object check-ins add a layer of game mechanics to what was before an unstructured activity. If you scan stuff, you might get a reward, and it’s a bit like a scavenger hunt with real-world items. When you do scan an item, of course, in addition to unlocking a reward, you will also potentially be unlocking a marketing message from a business left in the form of a video, photo, or comment.

The new stickybits will also offer a complete analytics dashboard for brands, showing them how many times their products have been scanned, who is scanning them, where they are being scanned, who has scanned a product the most, and who is the most influential.

The app will also amp up the social sharing via Facebook and Twitter. For instance, a Facebook Like button is built right in. All of these are good moves. The product could use more focus. Consumers need hand-holding, especially when it comes to unnatural acts like using your phone to scan barcodes. It’s just something that hasn’t caught on as a mainstream activity outside of comparing prices in the grocery aisle. If they can turn scanning products into a game that is actually fun, people would be much more likely to give it a try. But then, that is kind of up to the brands to figure out. 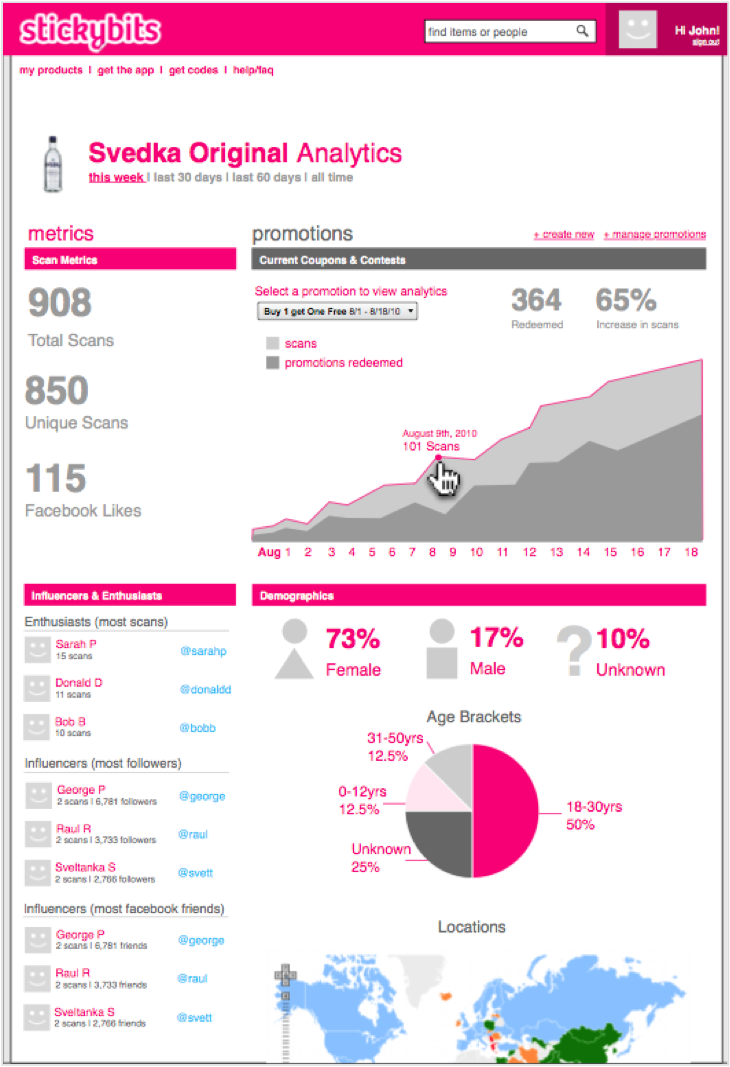