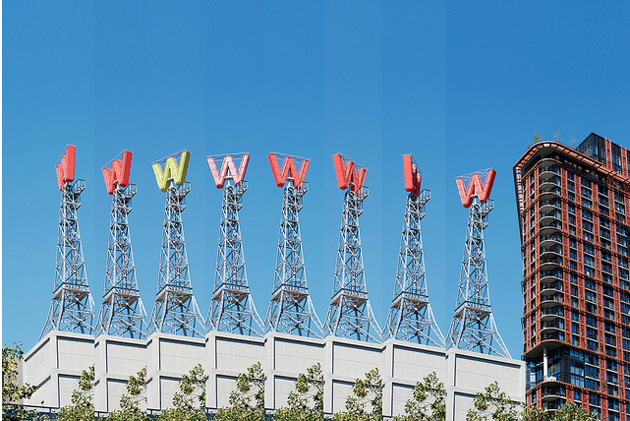 According to Media Culpa a blog that apparently obsessively tracks these things, photo-sharing site Flickr has hit the 5 billionth photo milestone today with the above, uploaded  by Flickr user yeoaaron. Media culpa blogger Hans Kullin also points out that Flickr has been growing at about 1 billion photos per year, over the past 3 years, eclipsed in market share by social giant Facebook which hit 15 billion photos uploaded in April of 2009.

As Facebook claims it was uploading over 2.5 billion photos a month in February of 2010, we’re loosely guestimating there are somewhere between 30 and 50 billion photo uploads on the site currently. It’s key to point out however, that people use less discrimination when posting photos to Facebook vs. Flickr, whose primary purpose is socializing around the public display of your photographic wares.

In the meantime sit back and enjoy Aaron Yeo’s artistic interpretation of the view of the Woodward’s Building in Vancouver.

Update: Flickr confirms and Kullin shares some of the methodology behind tracking the milestones.

Flickr gives each photo a serial number and they have previously officially confirmed that for example the photo with the ID 3 billion is actually the 3 billionth photo: http://blog.flickr.net/en/2008/11/03/3-billion/ Date and serial number of a photo can be found via Exif daya: http://www.flickr.com/photos/lenglengtan/250000000/meta/.

Once you know that for example 5 billion has been reached (just upload a photo to your own account to know when the milestone is approaching), I use a link to the Exif meta data that I post to the browser, that includes the unique serial number. Flickr then redirects this link to the correct photo, in this case http://www.flickr.com/photos/yeoaaron/5000000000/meta/