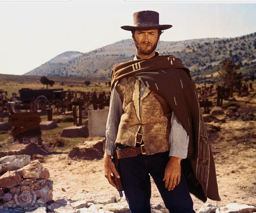 Six months ago, Google launched its very own app store for enterprise apps, the Google Apps Marketplace, at the search giant’s Campfire One event. The idea behind the marketplace was fairly simple—using a set of APIs, third-party apps could deeply integrate their products within Google Apps and offer these free or paid apps to the productivity suite’s users. At launch, Google partnered with 50 startups and companies to provide these apps, including Zoho, Socialwok, Aviary, and more.

Since March, Google has been steadily adding additional apps to the store, including Bantam Live and Bill.com, and now counts more than 200 installable apps available in the Marketplace. Google says that there are 4 million Google Apps users (out of over 25 million users) with Marketplace apps installed on their domain. The Marketplace itself is a big venture for Google; not only is it a way to provide more functionality for Apps (and draw more users) but it’s also a monetization channel (Google takes a 20 percent cut of each sale). Google has been actively trying to get more developers to add their apps to the platform, even posting glowing testimonials from developers who offer apps on the marketplace. To see how representative these testimonials are, we decided to speak with a number of developers to see how their apps are actually performing on the Marketplace.

Socialwok, a collaboration product that adds a social layer to Google products and Microsoft Outlook, launched as a pilot partner for the Google Apps marketplace in March. Socialwok’s founder Ming Yong says that the startup was able to sign up 4,000 businesses in the two weeks following the launch of their app. After this huge spike, says Yong, downloads of the app went down by half. Socialwok, which is the third top rated app in the store, is now seeing 600 to 800 businesses adding the app per week.

Yong pointed out that via the App Marketplace, the startup was able to sign a big deal with a hotel chain to use Socialwok as a separate application across its business (not just within Google Apps). Apparently, the company saw Socialwok on the App Marketplace and became interested in using the full platform.

But one drawback, says Ming, is the vast amount of noise on the Marketplace and that it can be difficult for users to separate the wheat from the chafe. “There are some developers who just want to have a little Google dust on their brands and have zero-integration with Google’s actual product,” he explains. “There seems to be a more the merrier attitude when it comes to accepting apps in the Marketplace; Google needs to do a better job with regard to discriminating which apps are integrated.”

Currently, Google lists the top five rated apps, the top five downloaded apps, suggestions of popular and notable apps, and a few featured apps on the front page of the Marketplace. You can also search for apps generally by functionality (i.e. accounting, workflow) or by name. 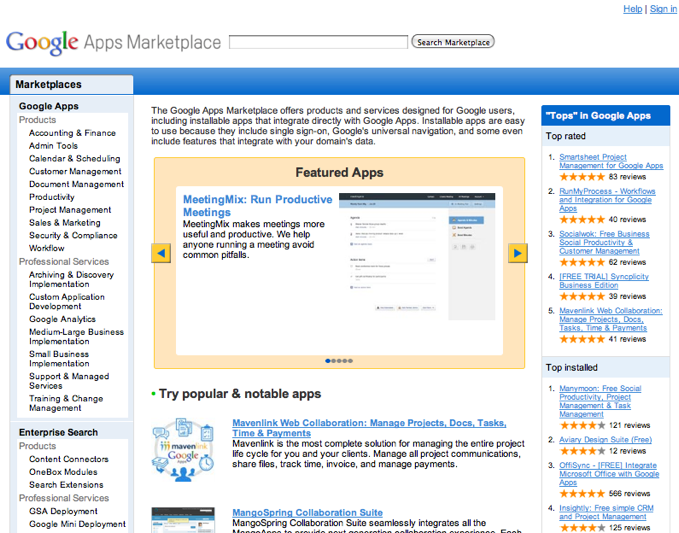 Productivity suite Zoho (which actually competes against Google on a number of products) launched two apps, CRM (which is the fifth top installed app on the marketplace) and Projects, in March and added two other apps, Invoice and Helpdesk, a few months later. Zoho evangelist Raju Vegesna tells me that shortly following the launch of the Marketplace, Zoho saw a few hundred downloads a day, but growth leveled off within a month, and now the company sees less than 500 installs total of its apps per week.

One feature that is missing from the Marketplace, says Vegesna, is the ability to test out apps before installing them (Vegesna didn’t know the exact uninstall rate but we heard from one developer who preferred to remain anonymous that the uninstall rate of Apps on the Marketplace is around 20 percent). Vegesna agreed with Yong that there is a lot of noise on the marketplace but said that it’s not nearly as tough to differentiate as it is on Apple’s App Store.

Aviary, which offers a suite of design tools within an App on the Marketplace, also launched as a pilot partner in March and has risen to the second most installed app on the platform. Aviary founder Avi Muchnick declined to give us specific numbers but said right after launch there was a huge insurgence of traffic, but downloads have since dropped to a steady pace.

Aviary is not seeing a large amount of web referrals to its site from the marketplace. But one of the major benefits of being on the App marketplace, rather than downloads, he says, is brand awareness of being associated with Google. Echoing Yong and Vesegna’s criticisms, Muchnik adds that the app marketplace is not ideal for users to discover applications

It’s important to note that Aviary, Socialwok and Zoho all debuted their apps at the launch of the Marketplace, when buzz and downloads were high. I bet that apps that launched a few months after March aren’t seeing nearly as much traffic as these apps did in March. Bantam Live’s CEO John Rourke, who launched his CRM app in the Marketplace in June, said he’s pleased with the performance of his app (he declined to give us numbers). Google says that CRM is a top search term for the Marketplace, so it seems that those types of apps are seeing success on the Marketplace (Bantam Live is currently a featured app).

Even looking from the testimonials Google has published, as a whole developers seem to be pleased with the traffic post launch. For example, productivity and task management app Manymoon claims that it is adding 1,000 new sign-ups per week. And it is the top installed app on the marketplace so that should probably give developers a benchmark of how the most popular app in the marketplace is faring.

Of course, Manymoon is also free, which probably makes it more appealing than some of its paid competitors. In fact, all the top five installed apps are completely free for users except for Zoho, which is free for only three users.

One well-known technology company (which asked to be anonymous), which launched its app on in conjunction with the roll out of the marketplace in March, said that while the number of apps being downloaded is lower than they initially expected. But the app has been able to draw a wide variety of customers, including educational institutions and local and state governments.

The complaint this particular company had was around the marketing of the service to the millions of Google Apps domain administrators. According to the startup, Google seems to be marketing the platform mainly to new companies that join Google Apps. Another way the service could improve, says this company, is to provide a way for Apps administrators to notify users that a new App has been deployed.

As a company spokesperson says, “We understand that Google wants to be sure to protect businesses from having their employees heavily marketed to, and that’s the dilemma of a marketplace like this – it’s massive, but you have to exercise restraint in how you market to it. There’s no easy answer, but anything that helps apps raise awareness among end users in a tactful, responsible way, would be very helpful.”

Another issue that I heard from a number of developers was how Google will integrate its other marketplaces (Android, Chrome) into the App Store. Many of the developers who offer apps in the Marketplace also have Chrome plug-ins and Android apps. Socialwok’s Yong pointed out that it would be helpful to be able to cross-promote apps from each Marketplace.

One developer I spoke to was concerned over the upcoming change in the payment structure for App developers. Currently, users who download apps pay the developers directly. He says that by the end of the year Google plans to take over the payments process and will collect all the payments from users and will distribute payments to developers accordingly. He says that not only will this new payments integration will involve an adjustment of his product but he hopes that Google will offer a payment system that can be integrated in the same way for the Chrome web store and the Android Marketplace (he thinks that each integration will have to be separate and won’t be unified).

As you can see from these anecdotes, developers and startups seem generally happy with their app’s performance on the Marketplace. But clearly Google has some improvements to make, particularly in the area of filtering out apps, marketing and app discovery. Another observation—if all of the most popular apps are free, I am left wondering how many of the 4 million users who use apps are actually paying for their apps.

It seems more likely that for now, the Google Apps Marketplace is good exposure for business apps, as Muchnick says. It can only help to be associated with Google Apps, a product that Google has very high hopes for as a viable cloud-based alternative to Microsoft Office.