Today, after many previews, speed tests, and leaked videos, Microsoft will be finally unveiling the full public beta of Internet Explorer 9. I recently sat down with Dean Hachamovitch, Microsoft’s general manager in charge of IE9, who took me through some of the main features of the new browser and sat down for the TCTV interview above.

IE9 is built for speed, it takes advantage of the latest HTML5 and other modern Web technologies, and makes a point of stripping away all unnecessary UI elements. The IE9 browser will only work on Windows computers, but it takes advantage of the graphics processor for hardware acceleration and the multiple cores in most PCs to offload different tasks. “We are using all the PC and we are putting the site at the center of the design,” says Hachamovitch. “Our goal was to have the sites shine through.”

One of the first things you notice about IE9 is how barebones it looks. The semi-transparent chrome around the browser is designed to disappear. There are very few buttons because people don’t use them. According to Hachamovitch, for instance, only 25 percent of people ever use the home button. Instead of the usual Microsoft feature overkill, IE9 removes features and refreshingly simplifies the experience. If you go by pixel count, IE9 gives more real estate to sites than either Chrome, Safari, or Firefox. To illustrate this, Hachamovitch opened each browser in a different window and pointed them to Twitter. In a window the same size as all the rest, IE9 was able to show one extra Tweet because it didn’t waste as much space at the top with a clutter of toolbar menu items.

IE9 also uses the entire desktop to its advantage. Any page or tab can be pinned down to the taskbar at the bottom and launched like any other app. “The other guys I’d characterize as being browser centric,” says Hachamovitch, “we are going to be site-centric.” Microsoft is launching with a slew of partners from A to Z, including Amazon, CNN, and Jango, to tune their sites especially for IE9. When you visit each of these sites, the button background colors change to match Amazon gold or CNN red to match the site. And when you pin that site to the taskbar and hover over it, a customized list of options pops up such as creating a wishlist or playing a stream of songs.

Of course, Bing is the default search engine. And finally, Hachamovitch addresses the need for sites written in HTML5, CSS3, and friends, all of which IE9 supports, to get to the point where they can use the same markup language no matter what browser visitors are using. Today, that is simply not the case. 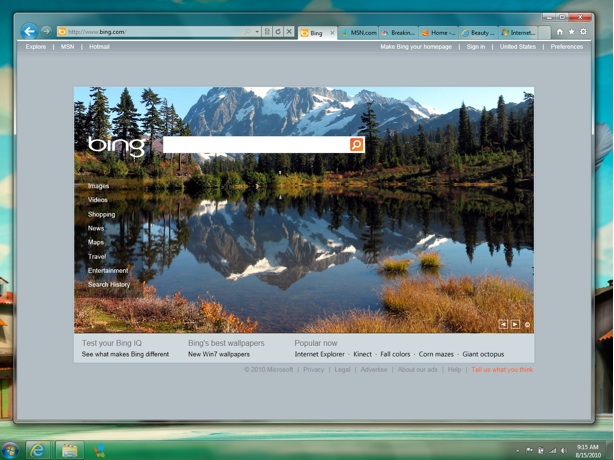 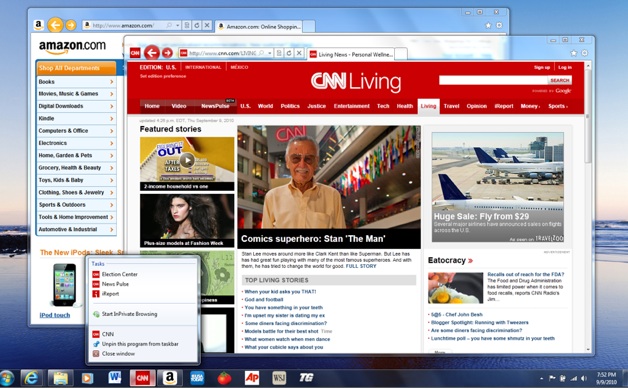