Today at a special event marking the launch of IE9, Microsoft announced some compelling new features for Bing that will be enabled by the new HTML5/CSS3 functionality available in IE9 (which will presumably work in other modern web browsers, too). Bing will be launching these new features in a preview form in a month.

You may be familiar with Bing’s daily background image (a feature that Google copied a few months ago). Bing is going to start building on this feature by introducing HTML5-based video backgrounds, and interactive photos that take advantage of the Canvas element. The result didn’t add much from a functionality perspective, but it looked great. Another good looking feature: Bing will now include moving backgrounds as part of its weather widgets.

Some of the features shown off weren’t just eyecandy. Bing will start using animations to make jumping backwards in your search history less jarring. It will also make use of small, hovering windows as you scroll down the screen to keep navigation tabs in view. And the last feature shown off appeared to be an automatically generated slideshow that can help you visually explore a query (we’ll have more details on this shortly).

It’s worth pointing out that nothing comparable to Google Instant was shown off, though Microsoft has publicly said that it didn’t intend to directly compete with that feature in the immediate future.

Microsoft oddly doesn’t have screenshots or video footage of the demo ready yet, but we’ll update this post as soon as we get the footage. 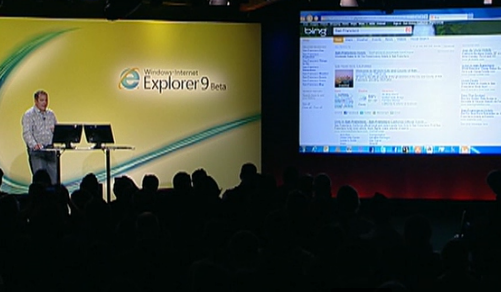