Twilio, the service that enables developers to add SMS And telephony functionality to their applications with a relatively small amount of work, wants to make sure it keeps growing at a rapid pace. And to do that it’s turning to an age-old tactic: it’s slashing prices across the board.

Twilio is now serving nearly 20,000 developers, and it says that it’s using its growing volume to negotiate better deals with the telephony providers it works with (it’s also sacrificing some of its margins, but believes it will recoup those and then some as price adjustment drives further growth in its development base). And for many developers the changes are substantial — in some cases, CEO Jeff Lawson says that a developer using Twilio will see as much as 66% in savings.

As part of the pricing restructure, Twilio has also decided to publicly disclose its volume pricing. Many services will only share these prices in secret, and will renegotiate them on a per-case basis. Lawson says that Twilio wants to keep everything transparent, taking a page out of Amazon’s Web Services playbook, so it’s posting its volume discounts online.

In addition to the pricing news, Twilio is announcing a few other more minor developments. Last week the company added new features to its API, including the ability to search for phone numbers using vanity names (e.g. 415-JSN-RULZ). It’s also launched a gallery of customers who are pleased with the service, and a gallery showcasing what developers have built.

In terms of growth, Twilio says that it has increased the number of developers on the platform 5x since the beginning of the year and that in a single day it now connects the same volume of calls it saw in all of January. 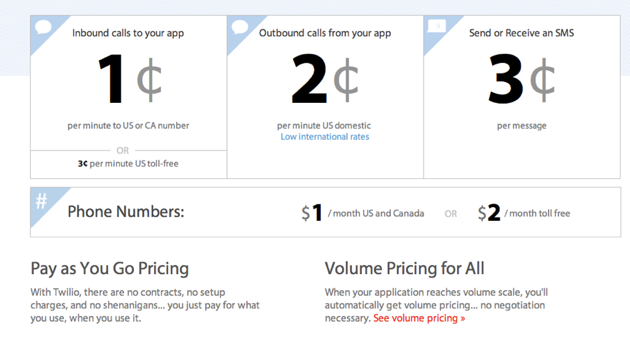