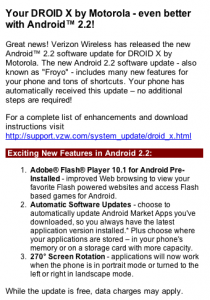 If the rumor mill was always right, we’d have seen Android 2.2 hit the Droid X way back in early August. Or, if we were cutting it a bit of slack, late August. Or last week. Name a period of time in the last few months, and Android 2.2 on the Droid X was almost certainly “coming soon.”

But this time, it’s for real! Probably.

Over the last day or so, a handful of Droid X owners have purportedly received texts pointing them to this page,which resides on Verizon’s own DroidDoes domain. “Verizon Wireless has released the new Android™ 2.2 software update for DROID X by Motorola.”, it says!

The only problem: Verizon hasn’t released Android 2.2 for the Droid X.

As Droid-Life points out, it looks like this page was created (or at least modified) just 4 days ago, on September 10th. Unless Verizon secretly makes a habit of building up these update information pages weeks and months before an update actually goes live, it seems like 2.2 should be hitting the Droid X reaaally soon.