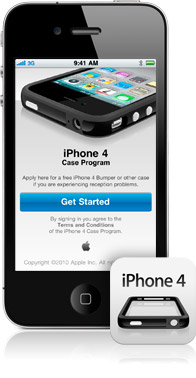 Remember Antennagate? You probably do, but no one seems to talk about it anymore. Since Apple held a press conference to address the iPhone 4’s attenuation issues in July, undoubtedly millions more units have been sold. More units, more problems, right? Maybe not.

“We now know that the iPhone 4 antenna attenuation issue is even smaller than we originally thought,” Apple says in a statement on their site today announcing a formal end to the iPhone 4 Case Program. That program, which gave a free case to any iPhone 4 owner that requested one (or gave a refund to those who bought one), will formally end on September 30. Though Apple does note that any user who is still experiencing a problem can call AppleCare to request a free bumper (and one would have to assume they’ll get one).

So if you do feel like you want a free case for the iPhone, get your order in fast. The directions for that are still on the site. They do note that if you bought your iPhone 4 before July 23, you would have had to apply by August 22 for the case — otherwise you have to apply within 30 days of the purchase. But again, for this formal program, the free bumpers will stopped being handled through Apple’s website (and iPhone app) for people who buy iPhone 4s after September 30.

Apple also notes that for units sold after September 30, they’ll be returning to their normal returns policy.

Apple is not sharing any specific statistics on the antenna issue, but during the July conference, CEO Steve Jobs noted that only a half of one percent of iPhone 4 owners had called Apple Care to complain about the issue. He also said that the return rate for the iPhone 4 was much lower than the iPhone 3GS at 1.7 percent. But he did note that the dropped call rate for the new device was slightly higher — by less than one more call per one hundred calls. At the time, he indicated that the iPhone 4 case may correct that.

If Apple is now saying the problem is “even smaller than we originally thought,” one has to assume that some or all of those numbers have actually decreased. But specifically, Apple is only saying is that, “a small percentage of iPhone 4 users need a case.”

My experience remains the same. As I’ve noted, the issue is real, but it’s not really an issue. I’ve now been carrying around the iPhone 4 for about three months, AT&T is still awful in San Francisco, but the iPhone 4 actually seems to work a bit better than the iPhone 3GS did. The antenna issue hasn’t hampered my daily use of the phone at all — and I don’t use a case.

Some will claim that’s the fanboy in me talking — but if a device is broken, I’m not going to use it. That’s just reality. And the reality is that it’s not broken. Like so many things, this issue was overblown.