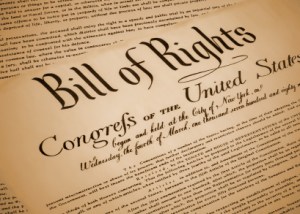 You know something I love? The US Constitution.

Not because it’s one of the most artfully drafted pieces of legislation on the planet (covering the whole spectrum of rights due to every man, woman and child in the United States and yet still with less legalese than the average EULA). Not because of the wonderful stories that surround its creation (I love that there were three  years between the ratification of the Constitution and the ratification of the Bill of Rights because the framers got tired and wanted to go home).

The reason I love the US Constitution is that it’s written down, so anyone can read it.

Back in the UK, we have what’s laughingly referred to as an “unwritten constitution”, which is as logical a construction as “inedible food” or “dry water”. Really what we Brits have is a rag-tag collection of case law, treaties, Royal prerogative and convention that, taken as a towering whole, define the relationship between the British state and her Majesty’s subjects. It’s no wonder, really, that you people wanted to throw it out and write your own.

And yet, given how comparatively accessible your rights are – a core document of seven articles, the ten main amendments comprising the Bill of Rights plus seventeen more to tidy up things you should have got right in the first place – it’s franky amazing to me as a Brit that so few Americans appear to have read them.

No more alarming is the lack of knowledge than when it comes to “freedom of speech”. Barely a day goes past without a (usually anonymous) troll in the comments section criticising TechCrunch for deleting their abusive, inaccurate, trollish comment on the basis that we’re attacking their “right to free speech”.

And it’s not limited to TechCrunch: the story is similar across much of the Internet. Take this post by Michelle Greer, on her blog. Michelle is a TechCrunch reader who was subject to a barrage of abuse – largely focussing on her gender – when she wrote a comment on Mike’s post about female entrepreneurs. The post itself makes disheartening reading, but its the comments that made me so frustrated I wanted to punch the screen.

One particularly ignorant dick of a commenter accused Greer of wanting to “ban all free speech for men” while a more measured response suggested that “freedom of speech has limits”. Meanwhile on a Business Insider post on the same subject, a commenter (claiming to be a woman) took the side of the trolls, saying “I’ll fight for anyone’s right to freedom of speech, even if I don’t agree with (nor resemble) it.“ Whatever that means.

Meanwhile, Rackspace’s decision to deactivate the hosting account of hate-preacher Terry Jones (who by the way was much more fun when he was part of Monty Python) sparked a similar debate, using similar language. Hilariously, given the site in question was promoting the burning of books, Jones was quoted in multiple news outlets saying that “We feel that [Rackspace’s move is] definitely an indirect attack on our freedom of speech”.

Even elected officials are at it, with Sarah Palin recently taking to Twitter to support “Dr” Laura dr Schlessinger’s decision to quit her radio show because “her 1st Amend.rights ceased 2exist “

Enough. It pains me that I – a Brit – have to lecture Americans – particularly those of you who would be President – on your own laws, but here’s the stark truth of the matter… You do not have a blanket right to freedom of speech: not in stores, not in bars, not in other people’s private homes and not – in almost all cases – on the Internet.

And you certainly don’t have that right enshrined in the 1st Amendment, which reads….

“Congress shall make no law respecting an establishment of religion, or prohibiting the free exercise thereof; or abridging the freedom of speech, or of the press; or the right of the people peaceably to assemble, and to petition the Government for a redress of grievances.”

Which is to say, the US government shall not arrest you or otherwise prevent you from exercising your right to say whatever batshit crazy bullshit pops into your head. That’s why David Petraeus and Robert Gates and the FBI were reduced to begging Jones to stop his book burning nonsense, but why Rackspace – by virtue of not being a branch of the Federal government – could yank Jones’s site without so much as a with-your-leave or a by-your-leave. Rackspace’s relationship with Jones was contractual, not constitutional – and their contract is clear…

In TechCrunch comments – or just about any other comments system online – there isn’t even a contract. You are here as our guests, and if you can’t behave yourself – or even if we just feel like it – you’re gone. No, we can’t call in the Feds to back us up (unless you start making physical threats – which, amazingly, some of you do from time to time)  but fortunately we don’t have to.

This power was demonstrated perfectly this very week when Mike decided to block all commenters originating from Reddit users after the site decided to encourage its readers to troll us. Of course the usual chorus of “freedom of speech” began in earnest but as usual those shouting the loudest were those the most ignorant of what they were talking about. The only thing TechCrunch is guilty of in blocking Reddit users is – arguably – an un-appreciation of irony, given that not long ago we berated Digg for caving to the demands of the mob, and then we went ahead and cancelled our 50 days of logos because of… well… quite.

Clearly though, as the founding fathers understood back in 1789, freedom of expression is – generally speaking a good thing. Just because there isn’t currently a bill of rights that extends to private citizens using private websites in the online sphere doesn’t mean there shouldn’t be. In fact the events of the past few days – the Terry Jones madness, the Reddit debacle, the abuse directed towards female commenters on TechCrunch – have prompted an odd idea to pop into my head. An idea that someone might want to pick up and run with.

What I have in mind is a voluntary Bill Of Rights for private websites and online communities. Maybe half a dozen principles that signatory sites agree to abide by, in return for similarly codified standards of behaviour they expect from their users. Sites who want to opt-in would display a clear link to those rights somewhere on each page, and users would be able to read them and understand the circumstances in which their comments – or similar content – are likely to be deleted, and those in which they will remain. Perhaps the idea could be expanded to include some kind of democratically elected panel – representatives of publishers, hosting companies, freedom of speech advocates – to settle disputes. Or maybe that’s over-complicating things.

Whatever the format, it seems fitting that the first right would concern freedom of speech: explaining (in clearer terms than these) that in most cases users can expect to have their comments left intact, even when they are critical of the site they’re commenting on. However, ad hominem attacks will not be tolerated, nor will comments that disparage others based on race, gender, sexuality or nationality.

Another right might concern inter-site trolling. It would seem sensible for signatory sites to agree not to encourage their users to troll other sites. The spectacle of Reddit encouraging its users to troll TechCrunch made neither side look dignified.

I’m sure there are plenty of others, but like all good bills of rights, it should really be crowdsourced. Perhaps you could use the comments below to make suggestions and I’ll group them all together in a future post.

Or you could ignore me. Or tell me it’s a terrible idea. Or call me an idiot who should go back to Britain and stop telling Americans what to do. That’s your privilege. But it isn’t your right. Not yet at least.

[Update: For those looking for one, here’s a good example of a real first amendment issue.]