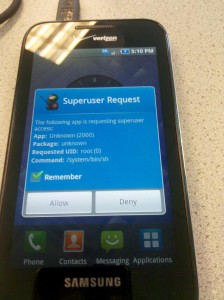 While it’s not surprising, it’s still good to know that the new Verizon Samsung Fascinate has been taken into the gentle hands of the modding community and given its root rights returned, a mere day after release.

An important moment in the life of any Android phone, but especially so for the Fascinate, as it means you’ll soon be able to get rid of the bloatware and Bing bits that Verizon so thoughtfully included.

To echo MG’s post from yesterday, this is possibly the biggest problem with Android and its openness: that I’m forced to root, recover, and ROM my phone before I can do exactly what I want with it.

But — and this is where I disagree with MG — I’ve been a power user for years now, so I expect any device I purchase to need at least some level of tweaking or hacking before I’ll be happy with it. Why should I expect Android be any different?

I can sum it up like this: if you’re the kind of person who won’t read a manual, or spend the time to fiddle with your device, you’re going to get shafted by Mr Corporate. It doesn’t matter if you buy an iPhone, or an Android phone, to get the full power of the device, you’re gonna have to hack it.

And that’s why geeks rule.

Anyway, if you’re keen to go root your new Fascinate (and you should be), instructions can be found here, with the full original thread at XDA here.