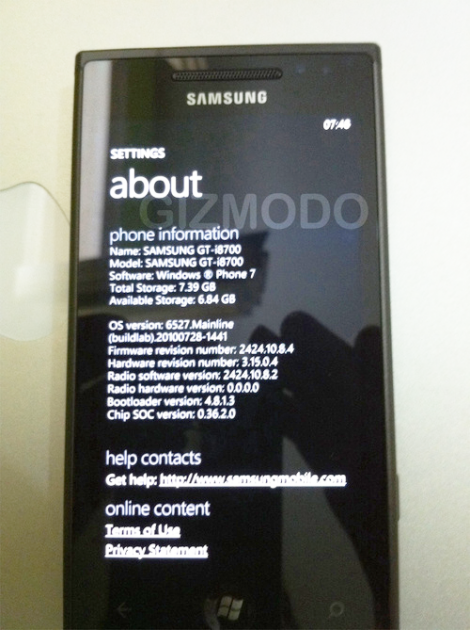 I know, I know — it was just starting to seem like we might go a full week without another Windows Phone 7 handset leaking out, right? Not gonna happen. Really, these things leak at such a constant rate that we’re starting to wonder if it’s not someone at Microsoft’s way of keeping WinPho7 on the radar. Either way: look, new phone!

These leaked shots (as obtained by Giz) are focused around something tentatively known only as the Samsung GT-i8700. We dunno the carrier, and we dunno if it’ll get a different name by the time it hits the shelves — in fact, we dont know a whole lot outside of what’s pictured: It’s made by Samsung, has a camera w/ flash, and 8 gigs-or-so of memory packed in.

Whatd’ya say, readers: if you’re already on the WinPho7 boat, is this the one you’re going to nab? If you were once a WinPho7 naysayer, does this one change your mind?