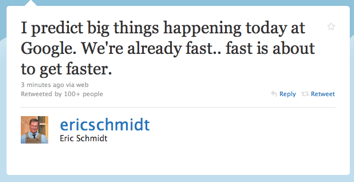 There’s been a lot of speculation about what will be announced at today’s Google search event. Google has been playing around with its logo, which seems to be pointing at the addition of live-updating results. We have received another clue from CEO Eric Schmidt today with a cryptic Tweet: I predict big things happening today at Google. We’re already fast…fast is about to get faster. Schmidt has only Tweeted 24 times since he joined Twitter last December.

Yesterday, Google’s doodle was action-oriented and kinetic, which Google called “fast, fun and interactive.” Today’s logo updates in colors as you type in the search box. And this combined with Schmidt’s message about speed points to Google rolling out the live-updating results-as-you-type feature they’ve been testing.

Search Engine Roundtable notes that people are reporting Google automatically take them to the search results page from the Google home page. And Google could also be launching AJAX-powered search results.

Tune in to TechCrunch to see how fast Google search will be getting at at 9:30 AM PT today.