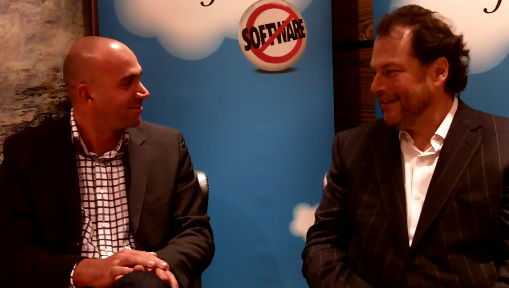 How businesses and brands deal with social media has become one of the defining issues of the recent web era. Today a pretty big leap is taking place which may define the next phase. Two of the biggest players have come together to create certainly one of the slickest and most seamless integrations I’ve yet seen of the realtime social web and enterprise worlds. Seesmic is to integrate Salesforce’s internal Twitter-like app, Chatter, into their platform. That makes Seesmic the first realtime social consumer app to go directly into the enterprise space. Seesmic will also suddenly have the potential to access to over 20,000 Salesforce customers who have used Chatter so far.

The news was unveiled at a 3,000-strong Salesforce conference in London today. Below we have an exclusive interview with Loic Le Meur of Seesmic and Marc Benioff, CEO of Salesforce.

Once you see Seesmic working with Salesforce’s Chatter it make perfect sense. Suddenly you can be having internal and external conversations at once.

It’s clear this is part of a long term strategic partnership between the two companies, and the rapport between the two CEOs is evident. While Seesmic has made a virtue of its ability to develop strong social clients on Adobe Air, Android, BlackBerry, Windows and (via Silverlight) Mac, Salesforce is clearly gunning for the space opened up by ‘enterprise social’ services like Yammer. We’re seeing the first integration of the realtime web and the enterprise, and there is plenty more to come.

At an interview in London, Seesmic’s Loic Le Meur told me “It’s not enough to have these two worlds silo’d any more… What we bring is the connection to the outside world without making it scary. With chatter you can directly send someone on the social web [via Seesmic] directly into the enterprise.”

For Marc Benioff, Salesforce CEO, it’s all about the movement to what he calls Cloud 2: mobile, social, realtime.

Indeed, he wrote a TechCrunch guest post this year, “The Facebook Imperative”, where he said “New realtime cloud applications, platforms, and infrastructure offer the path to redefine the future of collaboration.”

So how will the integration work?

Here’s an example: A Salesforce user on Seesmic will be able to push, for instance, a Tweet onto the Chatter wall of someone inside a company. That could mean pushing it to a sales rep or a social media response team. You name it. The upshot is a great ability to respond, in realtime, to social conversations around brands or products.

That could mean much better customer service – or more some interesting sales pitches, depending on which side of the fence you are on. But suddenly, instead of needing to physically cut and paste a reference to a Tweet or a Facebook Group or whatever, people who monitor social media can bring that data directly into the enterprise and work out a response. It’s going to make a lot of social media community managers pretty happy – at least the ones who use Salesforce (for now).

When companies need to respond to customer complaints on social media, they need to see context in terms of the prior conversation, internal company feedback etc – this Salesforce Chatter/Seesmic integration effectively makes the whole process a lot easier. It’s like the Missing Link between the enterprise and the realtime social web just got invented.

And by moving first on this plane, Seesmic is in a prime position to open up a completely new front against its competitors, like Tweetdeck, which remain locked in the social web and not at all integrated into enterpise systems.

Seesmic’s integration with Chatter has been made possible by its switch to the Miscrosoft Silverlight platform which allows for plugins. Adobe Air does not afford this, so, on the face of it, competitors could well struggle to create the same kind of ecosystem around their core product.

Much of this is discussed in our exclusive video interview with Benioff and Le Meur below.