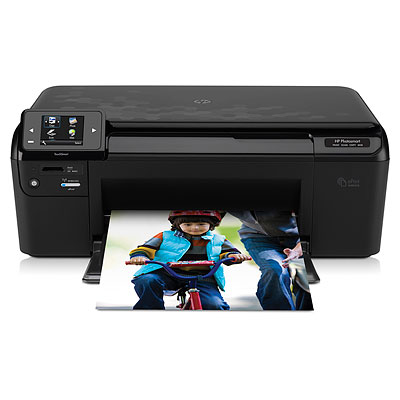 Despite numerous advancements in printer technology, the fundamental failing of almost every consumer printer on the market today is the necessity to install printer drivers. Usually these drivers are accompanied by all manner of essentially junk software that “helpfully” pop up reminders when your printer is out of ink, or out of paper, or whatever. Hewlett Packard is making what appears to be an honest effort to remedy this situation with their new ePrint solution, as featured in the Photosmart D110a. For a hundred bucks you can email documents to your printer, without loading drivers of any sort.

I generally don’t get excited about printers. The only printer I’ve ever really enjoyed was my original DeskJet 500. They just don’t make ’em like they used to. Thankfully, though, Hewlett Packard is actually trying to innovate the home printer, and I think the D110a shows an awful lot of promise.

The D110a is a small form factor printer / scanner combo. It has 802.11n wireless networking, allowing you to print from any computer on your local WiFi network. It has support for the HP iPrint app, so you can print photos directly from your iPhone or iPod Touch or iPad. And it has a variety of apps built in that allow you to print things without ever turning on your computer: crossword and sudoku puzzles, maps, recipes, and more.

But the real feature of the D110a is that it comes with an email address. This means you no longer need to install any software on your computer to print: you simply email documents to your printer’s email address. The whole thing revolves around the new HP ePrint service. You can add multiple ePrint-enabled printers to your account there, review each printer’s print queue, and more. 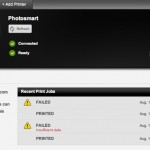 The printer I’ve been using has the email address 99ibr28iacgr@hpeprint.com, which isn’t exactly memorable, but once you add it to your address book you won’t need to remember it too often (and you can always retrieve it from ePrint site). Each ePrint-enabled printer is assigned a goofy 12-character address primarily to make it somewhat more time-consuming to would-be miscreants to try to stuff unwanted print jobs down your printer. 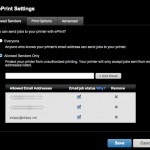 Your printer is further protected by a whitelist of permitted senders. It’s trivially easy to add new addresses, and once added they can immediately begin sending stuff to your printer. I tried setting up a single-user group on my Google Apps for Domains account, so that I could have printer@skippy.net print to the D110a, but the way Google Apps handles those groups does not work with the ePrint service: all jobs sent to printer@skippy.net failed to print because it looked like more than one recipient was included on the message.

The printer will only print jobs if it’s the only recipient of the message. As explained to me by HP, this is actually a security feature, and it’s one of those “Oh yeah, I should’ve figured that out myself” situations. If I email a photo of my daughter to the printer and several family members, and then one of those family members hits Reply All, I don’t really want their reply printed out, do I?

I have not tried to manually spoof an SMTP transaction to see if I can send stuff to the printer. If that’s the kind of thing you want to do, knock yourself out. I’ve already changed my printer’s address, so the one displayed here is no longer being used. 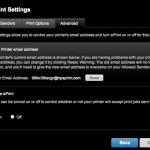 Changing the address is super easy to do, which is helpful.

I’ve had no problems emailing documents to the printer. It accepts files up to 5 MB in size. As for supported file formats, from the ePrint FAQ:

What attachment file types are supported?
The HP ePrint service will print email attachments for the following file types automatically:

*It is strongly recommended that you preview documents in Excel before printing.

When you move beyond printing, things change on the D110a. If you want to scan, you need to load the drivers, which loads the print monitor utility to tell you you’re running out of ink. The printer’s touchscreen interface lists an option to “Scan to email”, implying that the printer can scan an item and email either a PDF or JPG to someone for you. Alas, this is only accomplished by using your computer as an intermediary. The item is scanned and sent to your computer where it is added as an attachment to a new email message in your email program. That’s great if you use an email program. I use webmail exclusively, and so don’t have an email client configured on any of my computers. The scan-to-email feature failed with a pretty obscure error message for me every time I tried it.

Interestingly, the built-in web server on the D110a provides a “Web Scan” feature, allowing you to scan a document without installing the drivers. This is, of course, way too geeky for the average user to try (let alone find), but it’s there if you need it.

For a hundred bucks, the D110a is a solid little printer. Being able to email documents to your printer is a surprisingly useful function. If you don’t mind loading drivers to use the scanning feature, it’s an even better deal. More ePrint-enabled printers are coming from HP in the months ahead, too, so if the D110a doesn’t do it for you, keep your eyes open.