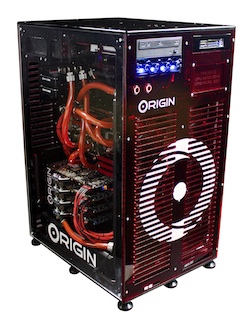 Meet the Origin Big O. It’s an Xbox 360 and high-end gaming PC combined in one rather hulking device. It doesn’t even have a pedestrian Intel Core iX processor. No, sir, for it packs a Xeon X5680 that can be overclocked to 4.3GHz. I suppose if you need to run 18 instances of World of Warcraft at the same time!

What else does the Big O pack? Oh, an Nvidia GeForce GTX 480, up to 24GB of memory, liquid cooling, etc.

So, the best of the console world and a pretty crazily powerful PC, too. Why choose when you can have both?

Oh, right, because it costs many dollars. The starting price is $7,669.

Pretty cool if you have the scratch—I certainly don’t.