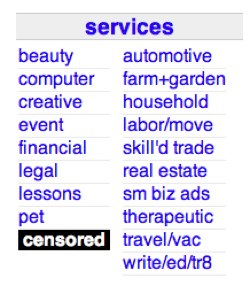 I’ve reached out to Craigslist for comment and await their reply. But the choice of words is significant – the section wasn’t simply removed, the censored word was used.

The site has been embattled as old press and state attorneys general use any excuse to blame sex crimes on the site. From South Carolina Attorney General Henry McMaster’s failed crusade against them to a variety of press stories about sex and other crimes. If it’s just a sex crime it isn’t a story. But if a listing on Craigslist was involved, it’s a big story.

Craigslist has fought back using little more than their blog and logic. And they’re right. Having prostitution up front and regulated, as Craigslist does, means less crime is associated with it. It’s not like prostitution, sometimes called the world’s oldest profession, was invented on the site.

The fact that eBay and others do exactly the same thing, but without human review and moderation, doesn’t seem to matter. Craigslist Sex is what scares the general population, and it’s what the press and the politicians will continue to use to get their hits and votes.

So the Craigslist Adult Section was removed. Is the world now a safer place?

Update: This only appears to affect U.S. sites, so if you’re looking for a happy ending in Saskatoon or the West Bank, have at it.