It seems as if the ads for Sony’s upcoming movie The Social Network — you know, the Facebook movie — are everywhere on the Internet. They’re here on TechCrunch, they’re on VentureBeat, they’re on Techmeme — they’re just about everywhere but Facebook itself. In fact, they’re even on rival MySpace. In fact, the movie is sponsoring a whole section of the other social network. Yes, the Facebook movie is sponsoring MySpace.

Again, this isn’t too shocking considering that the ads are everywhere on the web. But it has to be a little bit of a slap in the face for MySpace, which was once the king of the hill in the space but has long since been passed — and lapped — by Facebook. Now, not only is MySpace’s rival important enough to warrant a movie, but that movie is paying to help keep MySpace afloat.

It’s a bit like if Yankee Stadium was going to be renamed to Fever Pitch Park, after that (bad) movie about the Red Sox.

Further, when you click through to the movie area of MySpace, there’s another The Social Network ad. And that ad has one social sharing option: Facebook.

I know MySpace is supposedly cool with Facebook now in a defeatist kind of way. They just launched a Facebook sync tool to hook into the Facebook stream. But still.

Perhaps sadder than all of this is that no one has even bothered to make a Facebook movie trailer spoof for MySpace yet — probably the most obvious one. Twitter has one. YouTube has one. MySpace? They just have a movie section sponsored by the Facebook movie. 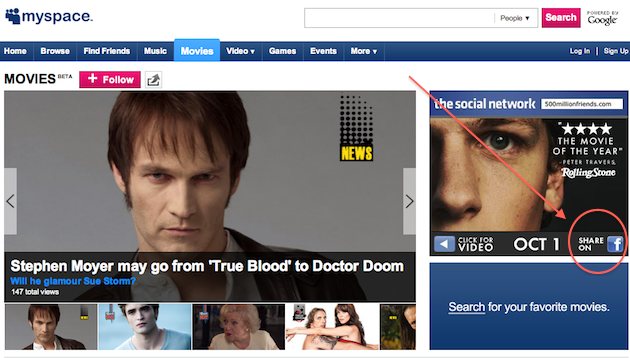