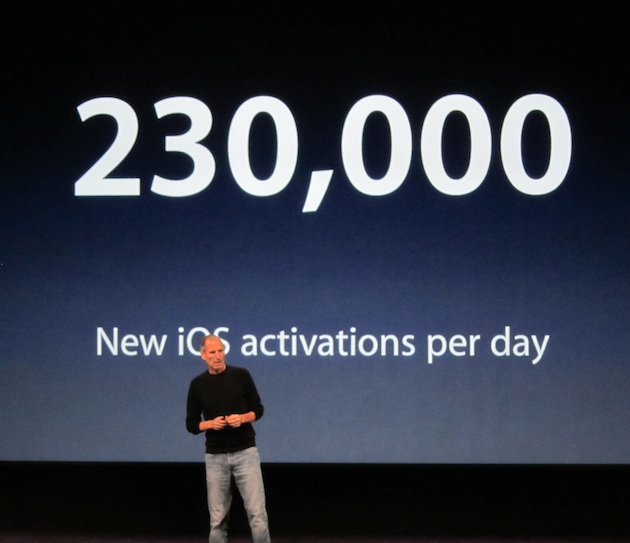 Last month, Google CEO Eric Schmidt noted that Google was activating 200,000 Android devices a day. Obviously, that’s a massive number. Today during the Apple event in San Francisco, Steve Jobs took the chance to one up him — then take a shot at Google.

Apple is activating 230,000 iOS devices a day, Jobs says. He made a thinly veiled reference to the Android numbers, and said “we think some of our friends are counting upgrades in their numbers.” Jobs said Apple is not doing that — if they were, the numbers would be much higher.

The way he phrased it, you almost have to assume Jobs is including iPod touches in those numbers — but you don’t activate iPod touches (unless he means activating the iTunes/App Store on the device). So perhaps he just means iPhones and 3G iPads. Either way, I fully expect Google to announce they’re activating 250,000 Android units — like, tomorrow. I’m only half-kidding.

Jobs also noted that 120 million iOS devices have shipped so far. And said that 200 apps were being downloaded every second from the App Store.

Update: Google is saying the 200,000 number does not include upgrades — and says they don’t even count all of them, only the ones with Google services. Here’s the statement:

The Android activation numbers do not include upgrades and are, in fact, only a portion of the Android devices in the market since we only include devices that have Google services.

I have a feeling this is going to be an ongoing theme between the two.