The EPA is revising the window stickers seen on new cars to more accurately reflect the capabilities of electric and hybrid vehicles. They’re also proposing, rather boldly, that a big fat letter grade head the sticker, ranging from A+ (for plug-in electric vehicles) to D (for Veyrons and R8s). The Alliance of Automotive Manufacturers has condemned the stickers, accusing them of evoking “school-yard memories of passing and failing.” Yes, well, that’s kind of the idea.

There are a number of new metrics on the proposed stickers, resulting from the fact that MPG, the only metric presented on the old sticker, is fast losing its relevance for consumers. That particular term has been replaced in part- or all-electric vehicles with MPGe, a measurement that compares mileage based on energy consumption, as opposed to liquid volume consumption. The energy yielded by a gallon of gas is converted into BTUs (not your sissy metric kilojoules, to which BTUs are almost exactly similar), which can be multiplied by various factors depending on energy source, eventually yielding a standard unit, the MPGe. You’ll get used to it.

Unsurprisingly, automakers are not amused by the letter grade, and to be honest it seems a bit arbitrary to me as well. They’ve essentially set the curve so that each grade represents a class of vehicles, and I’m sure you can guess where SUVs and luxury vehicles end up. Why not just let the numbers speak for themselves, or come up with a more relevant “headline”? It’s interesting how they seem to have chosen “non-judgmental” colors for, say, greenhouse gas emissions (they’re not red to green), but have no trouble writing an enormous C-. Why not judge a little more, though? The grade thing is a fixed game, but the EPA should feel free to display true information and comparisons that embarrass inefficient cars.

There are also several labels, as you can see, in addition to the vertical graded ones: 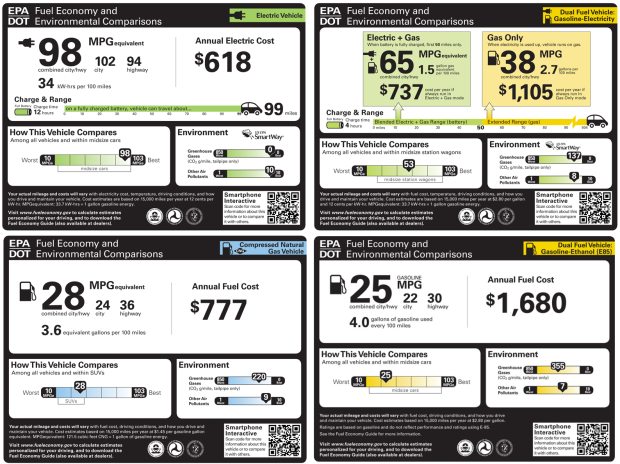 It’s like a muted rainbow of efficiency. This is to reflect the various fundamentally different vehicles out there right now. EVs, ER-EVs, plug-in hybrids, plain hybrids, frybrids, and what have you. While a single sticker might have been preferable, it would be impractical at the moment, and after all we can always do another revision later. At least they share a general layout.

One thing I think they should fix is the display of numbers that are clearly very rough estimates. The money saved, for instance, is simply not to be believed. The old stickers had estimates, and then estimates based on those estimates, and further estimates based on those. Let’s try to keep things grounded this time around. Let the label reflect the facts; manufacturers or dealerships can include “secondary” labels augmenting the facts — charge time, extra efficiency numbers, and so on.

Apart from that, I think they’re pretty nice. The design incorporates a lot more information yet stays relatively clean, and the inclusion of a QR code is thoughtful.

The new labels are just proposals at the moment, and the EPA will be accepting comments on them for the next two months. Want to do your part for green legislation? Give those guys a piece of your mind.