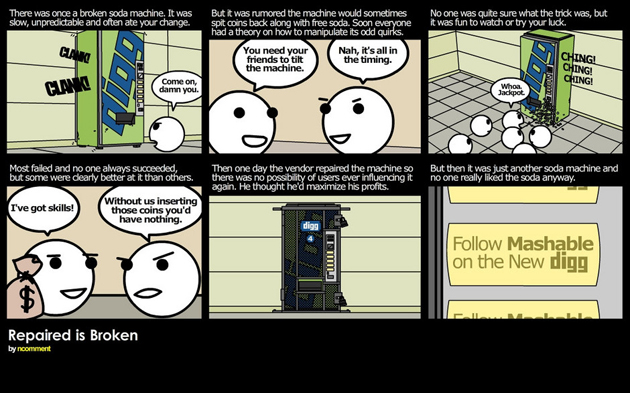 “Digg v4 is not a redesign, not a reskin, it is a 100% rewrite. It’s completely new design, code, architecture, and infrastructure. It has almost no relationship to the v3 system whatsoever.“

Social news site Digg is currently in the particularly bloody throes of its fifth user revolt and, unlike revolts one through four, we’ve heard that Digg is absolutely positively not capitulating to users on this one.

Has Kevin Rose finally decided to heed our advice? It’s not so cut and dry according to former Digg engineer Ian Eure who wrote “They Can’t Go Back” on his personal blog earlier today. One reason they can’t move backward? Talent, Eure emphasizes, in underline.

“Even if they still have the systems and the desire to roll back, they don’t have the talent to maintain Digg v3. Nearly everyone who built and worked on the legacy Digg codebase has left the company. When I started at Digg, the engineering team was: Joe Stump, Matt Erkkila, Eli White, Steve Williams, Steve French, Kurt Wilms, Nancy White, Bill Shupp, and Micah Snyder. Operations had Ron Gorodetzky, Scott Baker, and Tim Ellis. Except for Matt, everyone else has moved on. There were others, but those people were the core team that made the legacy code work, and they’re gone now.”

This makes sense. At the moment the Digg v4 “Top News” page is basically aggregating feeds from other aggregators like Reddit which is an algorithm flaw that needs to be fixed, now. Before your next episode of Diggnation, even.

The amount of pain that the power users are feeling makes for good drama and great headlines, but is secondary to the major coding issues and design flaws allowing competitors to garner traffic off your site. If your business is about aggregating eyeballs, it’s crucial to keep your eye on the ball.

Update: Kevin Rose responds on the issue of reverting back to Digg v3.

“The core of Digg v4 (Cassandra) will enable us to scale for the next few years, so it’s important that we stick with it. As of right now we are rolling the Digg v3 features into the Digg v4 architecture, there will be no need for us to go back once this is complete, as we’ll have the best of both worlds – Digg v3 functionality w/Digg v4 backend.”