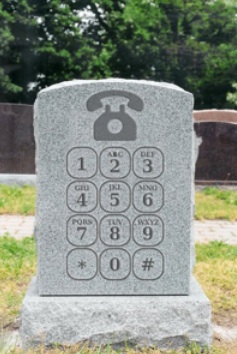 Editor’s note: The following guest post is by Nikhyl Singhal, the co-founder and CEO of voice-application startup SayNow.

Is it conceivable that one of our greatest inventions, the phone number, is about to face extinction?

Just ask Mark Zuckerberg. Earlier this year, when asked if Facebook would be around in 100 years, as long as Ma Bell has been around, Zuckerberg responded, “I don’t know. But I don’t know how long telephones will be around for.”  Will they be around for ten more years? I’ll go even further. It may not even take 5 years for the phone service, as we know it, to meet its demise.

Who’s going to lead the charge?  Voice on Gmail and Skype are just the beginning.  What are Facebook, Apple, Yahoo, and Microsoft doing?  As AT&T, Verizon, Apple and Google spent this summer hashing out plans for world domination, it seems that Facebook is best positioned to strike the fatal blow against our beloved carriers.  And it starts with those phone digits.

I’m certain my grandkids will never dial a phone number, or even have one. It’s time to say goodbye to ten digits along with the world’s oldest social network.  While we’re at it, let’s kill phone-tree mazes, do-not-call lists…everything associated with phone numbers.

Don’t misconstrue what I’m saying. This isn’t the demise of phone calls.  Far from it.  People will still talk on their phones.  They just want the service to be simple and fun, which won’t entail punching digits into a device to start a conversation.

Why put phone numbers on deathwatch?  Consider a few facts:

Compare this to your social networks.  You have control over who accesses your information; you have one username and profile that you use at all times; and applications fill in the holes and extend the network’s capabilities to communicate, play games and meet people on your own terms.

On any Facebook page, I can “send a message”, even if we aren’t friends. And I can choose to receive messages from non-friends. The key thing is the network sets up a policy, and I as a user can change this. We don’t have this choice on the phone network today. Anyone can dial my number, and I can’t control it—but I do control my interaction on a social network.

Google, Skype, and others try to resolve telephony problems by stuffing the phone system into the web.  Personally, I’ve spent five years at SayNow trying to eke more out of the digit-based phone system too.  We’ve built dozens of applications that enable brands, celebrities and millions of users to use the phone in an entirely new way.  But we’ve all hit the limits of what we can accomplish.  Instead of replicating the antiquated phone network inside the web, let’s instead dramatically simplify telephony by adding voice on top of our social networks.

If given a choice between Ma Bell and Zuckerbell as our operator, we should choose Zuck.  Despite criticisms about Facebook’s privacy settings, the site gives us far more control over our interactions than we have on the telephone.  Since our contacts live in the network, we already belong to the world’s largest white pages.  And with more businesses moving to social networks, throw in the global yellow pages, too.  So say goodbye to lost phone numbers, moving contacts between devices and even 411.  More importantly, just as you determine who can see your bachelor party photos, you will soon have complete control over who has access to call you and who doesn’t. As I write this I already hear my wife saying, “Honey, why can’t my mom call us anymore?”

Also relevant here are the creative smartphone applications that developers churn out daily.  None of these leverage the primary reason these mobile devices exist: voice.  Once smartphone platforms allow developers to initiate conversations and voice messages, you can bet voice will finally become flexible and fun.

Speaking of which, I was at a Lady Gaga concert recently, and the good people at Virgin Mobile arranged for Gaga to “surprise” a fan with a phone call that upgraded her seats.  Great idea, but we all know the entire activity was scripted and carefully orchestrated.  But what if it wasn’t?  Lady Gaga should be able to open her iPhone, see her Facebook, Twitter, or MySpace fans, choose someone checked in at the venue, and…. (cue drumroll), call them.  Call one of them.  Some of them.  All of them.  And whether you have 5 million friends or just 5, phone calls should be just that easy.  So enjoy punching those digits while they are still around.