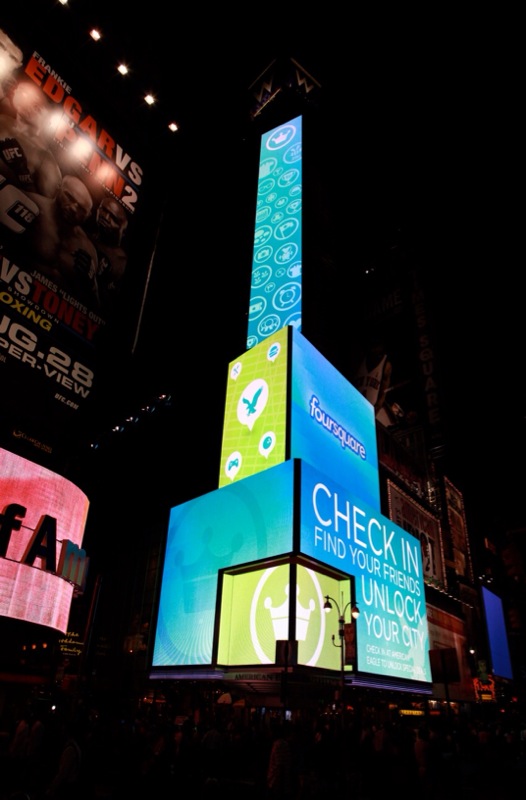 In terms of brand recognition, it’s hard to top a huge live display billboard in Las Vegas. But Foursquare has managed to do it. As you can see above, they now have a massive, multi-level and multi-angle display practically screaming about the service to all those in Times Square in New York City.

“Check in, find your friends, unlock your city,” the ad reads. In smaller print at the bottom it talks about checking in to American Eagle for some kind of special. Foursquare head of business development Tristan Walker confirms that American Eagle is behind the ad, which he says is the “largest digital billboard in Times Square.”

American Eagle or not, this is clearly a huge ad (and a huge win) for Foursquare itself. Walker thanks Foursquare’s designer Mari Sheibley for designing the thing. And hints that a version 2 is coming.

The phrase “you can’t buy this kind of publicity” comes to mind — probably because Foursquare, while well-funded, undoubtedly couldn’t buy this type of ad. (American Eagle owns the billboard, Walker tells us.) And yet there it is.

This also managed to one-up the big branding rival Gowalla got in New York City earlier this year when they were a part of a massive billboard that loomed large over Madison Square Garden.

This Times Square billboard is just about the opposite of a check in off the grid for the service.