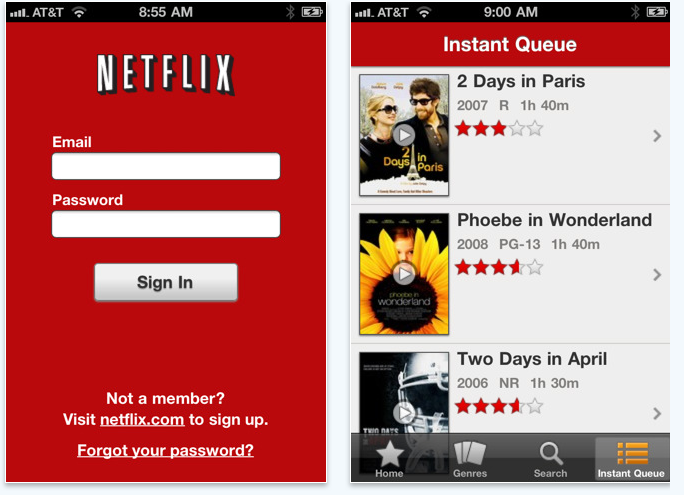 Want to stream Netflix shows and TV on a tiny screen? Well now you can. The Netflix iPhone app is now available on iTunes and it offers the same functionality you know and love on the iPad but on the smaller devices.

No huge changes here: you sign-in, pick a video, and start watching over wi-fi or 3G, with obvious quality reduction with bad reception. Click through for the press release.

LOS GATOS, Calif., Aug. 26 /PRNewswire-FirstCall/ — Netflix, Inc. (Nasdaq: NFLX) today announced the availability of its free Netflix App for iPhone and iPod touch, allowing Netflix members on plans starting at just $8.99 a month to instantly watch a vast selection of TV episodes and movies streamed to their iPhone or iPod touch at no additional cost.

The Netflix App is available for free from the App Store on iPhone and iPod touch or at www.itunes.com/appstore/.

“Apple has changed the game for mobile devices,” said Reed Hastings, Netflix co-founder and chief executive officer. “We’re excited that our members can now carry Netflix around in their pockets and instantly watch movies and TV shows streamed from Netflix right to their iPhone or iPod touch.”

The Netflix App delivers a high-quality viewing experience, a broad array of movie and TV choices and a clean, intuitive interface. It is available via both Wi-Fi and 3G networks. TV episodes and movies are conveniently organized into a variety of categories based on members’ personal preferences, popular genres, new arrivals and members’ individual instant Queues. Members can choose a movie or TV episode from any of the lists and just tap the innovative Multi-Touch user interface to watch instantly or to save the title for viewing later.

Additionally, users have the option of fast-forwarding and rewinding the video stream, and stopping at any time. When users want to start watching again, the video stream starts exactly where it was stopped, even on a different device capable of streaming from Netflix.