Mobile applications discovery and sharing service provider Appsfire is going social, henceforth enabling users to connect to Facebook in order to bring their Facebook friends in on the fun.

Basically, this allows Appsfire users to easily add their iPhone app collections and share them with their existing social graph, rather than forcing users to build a new one from scratch.

The venture-backed startup has also released some strong figures to back up their reason for being, but more on that below.

Up until today, Appsfire already enabled users to easily import all their apps into the service, using either automatic synchronization or by manually putting together lists of their favorite applications. Users get a vanity URL to share their up-to-date app collection (see myap.ps/bradfeld for an example).

Now that you can sign up to Appsfire using Facebook Connect, the idea is that recommendations and discovery of new apps will be even more relevant to users, provided their friends have similar tastes.

Appsfire says it will include support for more social networks in the future. 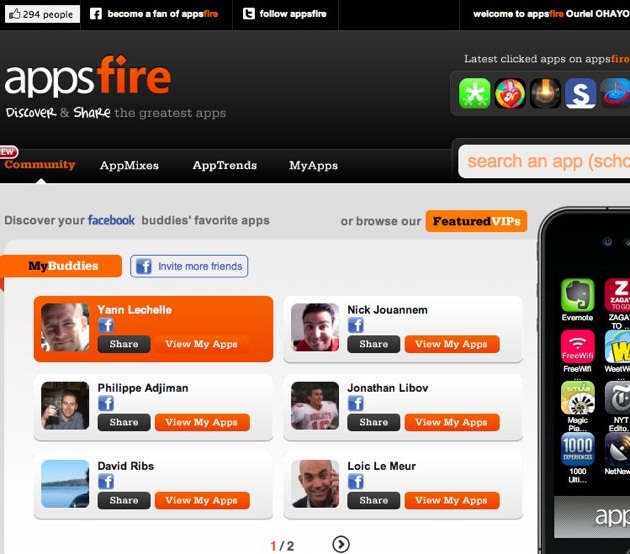 They’ve also gotten an official Facebook endorsement for their work, from the company’s Head of International Business Development Christian Hernandez:

We are convinced that the ability to discover applications based on what that your Facebook friends have installed on their device , will spur on a new vibrancy in the mobile developer ecosystem.”

AppsFire today also released an app ranking mechanism based on Facebook that updates in real time. The ranking is not so much a popularity one based on number of downloads, but banks on worldwide Facebook activity (likes, comments, shares, etc.) to determine which applications are hot.

The startup essentially scans the public Facebook feed for app URLs of any type and queries for number of likes, shares and comments from users. Appsfire is careful enough to filter what it calls ‘biased activity’ from apps that have naturally embedded Facebook sharing into their system (e.g. photo sharing apps).

For each app, the level of activity is rendered, a top 20 list is cooked up, and the rankings are updated every hour. Appsfire says about 1,000 iPhone apps are discussed on Facebook at any given day, which strikes me as fairly low to be frank.

The startup recently launched a new product called AppTrends, which essentially delivers near real-time rankings of iPhone apps based on the chatter on Twitter.

Since its emergence in January 2010 (the actual launch of the platform was in March this year), Appsfire has grown a lot. Currently, the startup says it is generating a whopping 1.5 million clicks per month to developers’ pages on the App Store, up 4x since its launch four months ago. These clicks result in preview pages, but ultimately lead to a lot of actual app downloads, the company claims.

AppsFire recently released AppStream for iPad (a dynamic wall of real-time clicked apps), which – quite unexpectedly – became the #2 Free App in the US (and top 10 in most countries) with over 1/4 million downloads and over 80,000 sessions per day.

Finally, the company says revenue from affiliate fees and paid placements is coming in nicely, and expects to turn cash-flow positive by the end of this year.