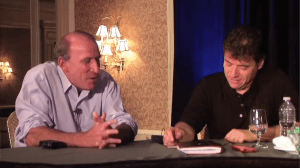 It’s perhaps appropriate that the event was held at Aspen’s St Regis hotel up in the breathlessly high altitude of the Rockies. For all the broad public policy challenges facing the technology industry, the persistent issue in many of the discussions here – what Verizon’s Tom Tauke described as the “elephant in the room” – is the unresolved Network Neutrality issue. As Tom Sugrue of TMobile remarked, the network neutrality issue is “sucking the energy out of all the other issues. Sugrue is correct. This issue – defined by the often byzantine and seemingly endless public debate between the carriers, the FCC, Congress, technology companies and the pro network neutrality lobby – is threatening to derail the longer term challenges to American edge in the global technology marketplace.

At Aspen, I interviewed a number of leading policy makers, entrepreneurs and senior figures in the telecom industry to discuss technology policy, American competitiveness, broadband policy, and, of course, network neutrality. Most of these conversations were frank and, at times, depressing. If America is indeed losing its edge, it’s clear that policy makers aren’t exactly sure how to reestablish this competitiveness in a 21st century global economic environment entirely foreign to that of the 20th century.

Blair Levin, the author of the National Broadband Plan, on the future of broadband in the US.

Scott Wallsten, Senior Fellow at the Technology Policy Institute, on why we can get Network Neutrality sorted out.

Tom Tauke, EVP of Public Policy at Verizon on the background of the Google-Verizon agreement. This video was recorded in a location with a loud background noise. We apologize for the poor audio quality, but believe the content is worth watching.

Blair Levin, Senior Fellow at the Aspen Institute, on how Woody Allen has the best explanation for the Network Neutrality impasse