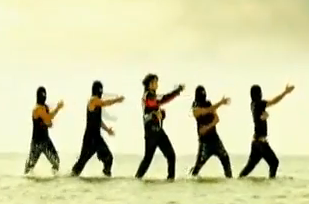 I have basically no idea what is going on in this video, but it’s awesome nonetheless. It appears to take place in two IKEA showrooms that have been completely whitewashed. In these rooms, a man and woman seem to stalk one another on Facebook, and then start chatting. Are they using WebTV? I’m not sure, but I’m not ruling it out.

Actually, those are Mac keyboards — maybe it’s the first sighting of the new iTV product?!

Then the main characters put on colorful shirts and go dance in another completely white room. And then they invite some friends to dance too — and use their computers. Then the action moves outside in what I can only describe as a version of TLC’s “Waterfalls” with men in ski masks. Yep.

Not speaking Turkish, the only word I can understand is “Facebook” — though I think I caught an “Internet” in there. Someone please clue us in.

The video is actually a bit old — from January, but BuzzFeed just picked it up a couple days ago and it’s now traveling around the Internet as it should have the first time. Enjoy it below.

Update: Commenter Mesut below has provided us with some lyrics: