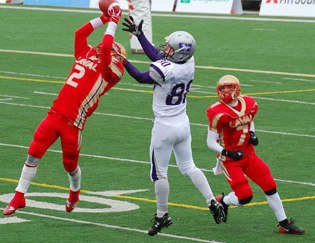 This post was written by Alex Rampell, the CEO of TrialPay. Rampell is a regular contributor to TechCrunch – see his previous guest posts here.

Outside of a tectonic shift in search results/quality – think how offering 100x more email storage encouraged people to switch webmail companies back in 2004 — people are not going to ditch Google as their primary search engine. And Google isn’t taking any chances – by paying Dell $1B for their search toolbar to be pre-installed on new Dell PCs, or pushing Android (who’s the default search engine?), they are doing their part to make current habits continue and lock down their whole “supply chain.”

For Google’s enemies, the best way of hurting the search goliath is not to build a better search engine, but rather to give people a reason to stop searching for a wide class of goods and services by preempting search on Google. Given Google’s dependence on harvesting “transactional intent” for its revenue, the key is to move transaction initiation off of Google. The ComScore search marketshare numbers at the top are somewhat meaningless; Google could lose massive revenue while their overall search share, for non-transactional search, stays strong or even grows. 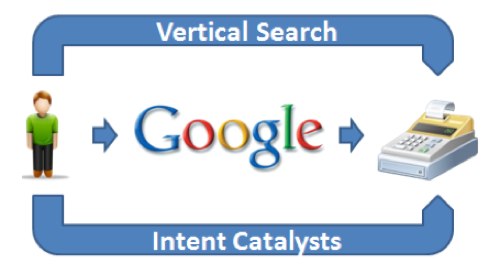 What can preempt Google search — or at least the money-making parts of it? There are two things for Google to worry about: Vertical Search and Intent Generation. Vertical Search will nip away at vulnerable parts of Google in the same way that Etsy, Copart or IronPlanet has nipped eBay – think OpenTable for restaurants, Kayak for travel, Amazon (yes, Amazon) for traditional e-commerce, etc. And Intent Generation catches people further up the funnel, before they search, and delivers them what they want, and gets them to purchase, before they start searching. Intent generation can also spawn impulse purchases and overcome inertia to get people to buy more quickly.

Intent Generation is perhaps the more dangerous, because it is stealing purchases from Google’s clutches – bypassing any kind of search.

Amazon: if everyone in the world signs up for Amazon Prime (unlimited, free 2-day shipping) and becomes a loyal Amazon customer, who would search for anything shopping-related on Google? We’re a long way from this happening, but imagine Amazon as the “e-commerce search engine” and Google as the “random stuff I’m looking for when not buying” search engine. I believe the long-tail of ecommerce resellers will deteriorate due to economies of scale and lack of geographical differentiation (e.g., 40,000 offline shoe stores, but only 5 of scale online), thereby making Google less relevant for a whole category of searches, and benefiting Amazon as the largest, broadest ecommerce company.

ZocDoc, OpenTable, and Yelp: Since becoming an OpenTable convert and Yelp user, I have not searched once for a restaurant on Google, and I bet these two companies are quickly taking away searches from Google for the dining category. I’m a big believer in ZocDoc, and if that can become the Expedia of medicine (long way to go for that to happen), Google could lose another category.

Kayak and Expedia: Expedia is a great example of what Google needs to avoid. If you’re looking for a hotel in Phoenix, you probably head straight to Expedia, Kayak, or another online travel agency (OTA). Google doesn’t have much to lose here because it’s never had a foothold in travel search, but its purchase of ITA is very strategic as a way of reversing that.

Groupon: for “impulse” purchases, things like Groupon are pushing offers to consumers rather than relying on consumers to pull (search). The half-million or so Gap Groupons sold on 8/19/2010 represent half a million customers who won’t be searching for Gap, much less any other clothing retailer, on 8/20/2010. Groupon snatched these customers (and their discretionary clothing spend) before they got a chance to search. Some of this is accretive and not preemptive, but consumers only have finite income and a million Groupons every day will have a substantial impact on Google.

Facebook: With more traffic than Google, Facebook only has an estimated 5% of the revenue of its rival. Social recommendations, a catalyst for Groupon’s success, can help preempt search, but these tend to further curate intent rather than harvest it, as Google does. The holy grail is the ability to show the perfect advertisement at the perfect time (precognition, like in Minority Report), something Facebook has a better chance of doing than anyone. The popularity of gaming on Facebook is another angle we have seen be effective – encouraging people to buy something (e.g., a new sweater at Gap) in order to get credits in a game. This is both an example of intent generation and intent catalysis; perhaps you knew you were going to buy a sweater eventually, but you decide to buy it today, and buy it from Gap and not Macy’s, in order to deck out your virtual restaurant on Restaurant City.

Payment Companies: By knowing how much you spend and where, payment companies have tremendous opportunity to change future behavior, generating and catalyzing intent. American Express recently sent me a very nice coupon/gift certificate for Barneys. A month later, when I thought about going shopping, I went straight to Barneys, and didn’t search elsewhere. It preempted my search and changed my behavior. Unlike Groupon, which offers great deals to everyone, payment companies have nonpareil data to use in targeting offers to consumers, and furthermore allowing merchants to target specific consumers. PayPal, American Express, or a resurgent Google Checkout could fundamentally change the nature of ecommerce through intent generation in the same way that Catalina Marketing has altered the CPG and supermarket industries.

With Bing, Microsoft has made a laudable attempt to out-Google Google, but Google has thousands of engineers who can quickly out-Bing Bing. The battle for search is over for now — Google won — but the battle for the underlying revenue is just heating up.