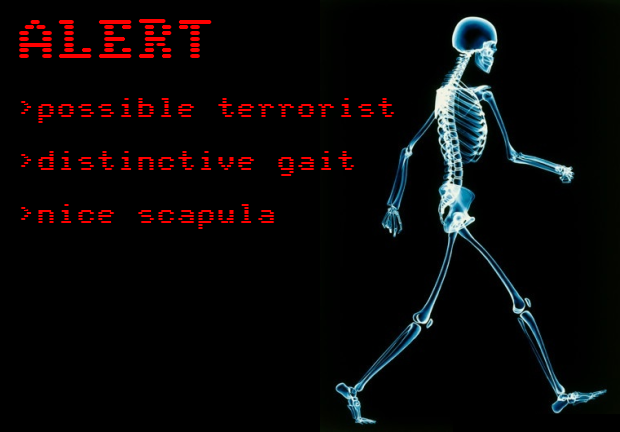 Don’t you feel secure? Don’t you love the amazing level of security provided by all that sophisticated machinery at the airport, watched over as it is, admittedly, by sleepy TSA agents on power trips? But don’t you wish inwardly that they wouldn’t stop at looking through your bag and removing your clothes with radiation, and just get straight to x-raying you? Well good news, friends. A system is on its way that will add your unique skeletal structure to a database and will (if it works) be able to identify you at a distance.

Trying to get terrorists to look into retina scanners is hard! And facial recognition software can be fooled with trivial alterations like shaving or smiling. Fingerprints — come on! I could remove mine right now! “But they can’t disguise their bones,” says Phani Kidambi, one of the researchers in charge of a project intended to ID people from 150 feet away based on bone structure. The project is at Wright State Research Institute.

Okay, seriously. Not only is this a creepy idea, but it appears they haven’t actually thought it through. First, they have to get detailed bone structure scans of every known criminal and terrorist (their idea, not mine). Then they have to prove that they can detect that bone structure through clothing and flesh — and then they have to design something that can do it from a distance.

Are you kidding me? This system will be as easy to fool as the next one. Unless they’re developing some kind of high-powered X-ray they’re planning on constantly blasting airport crowds with, they’ll have to rely on extended spectrum imagery. And that can be fooled by a HUGE number of factors. They talk about the potential of seeing someone “where the face doesn’t match, but the bones match…That definitely is a person of extreme interest because it appears he’s tried to change his face.” Great, so this technology also reliably detects faces in high fidelity as well! And I’m sure there’s no chance of a false positive!

Honestly. You’re never going to get everyone going through a major airport to submit to yet another scan, this one taking measurements of your bone density and structure. Seriously. This will not end well.