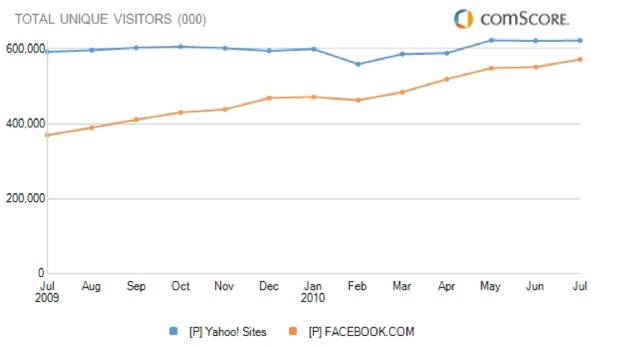 Yahoo thinks of itself as media company these days. (It finalized the handover of its search results in the U.S. to Bing today). But media companies are measured by the size of their audience and whether or not that audience is growing. Yahoo still commands the third biggest audience on the Internet after Google and Microsoft sites, with 622 million unique visitors worldwide in July. But if current trends continue, by year’s end it will lose that spot to Facebook, which attracted 572 million unique visitors in July (see comScore chart above). Note that these are visitors, and not necessarily active members, which Facebook says just passed the 500-million mark in July.

The gap between Yahoo and Facebook is only 50 million visitors, which has narrowed considerably since the end of 2009, when the gap was 125 million. In July, Facebook gained 20 million visitors from the month before, whereas Yahoo stayed completely flat. Looks like nobody is quitting Facebook over privacy or any other issues. Even with stops and starts, Facebook should pass Yahoo within three or four months unless Yahoo starts growing again.

In terms of pageviews, Facebook is already more than twice as large as Yahoo, with an estimated 250 billion pageviews a month, versus 96 billion for Yahoo (see chart below). With pageviews comes advertising dollars. Facebook is expected to take nearly 40 percent of the $3.3 billion in social networking advertising dollars estimated to be spent this year. That would still make it about one fourth the size of Yahoo in terms of revenues, which was $1.6 billion for Yahoo last quarter. But Facebook is only just now figuring out how to target advertising across its network.

In the U.S., Yahoo is in the stronger No. 2 position, and Microsoft is in the No. 3 spot, with only 20 million monthly uniques separating it from Facebook (165 million versus 145 million in July). But Facebook will pull ahead there as well, and is also strong in specific categories such as video, where it is already the third largest in the U.S. (after YouTube and Yahoo).

It is not just Yahoo that is looking over its shoulders now, but also Google and Microsoft. 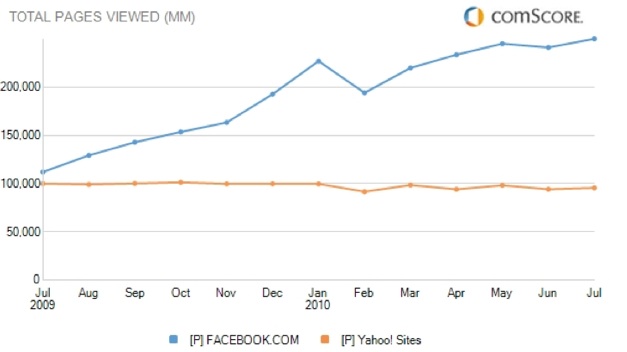