Back in the old days, Facebook was a site where college students could share photos of their youthful indiscretions without having to worry too much about their boss or parents stumbling across them. That isn’t the case anymore. This isn’t an inherently bad thing — there’s a reason the site has over 500 million people — but there’s also room for startups to fill in the more private niches that Facebook doesn’t. Enter The Fridge, a Y Combinator-funded site launching today that makes it easy to create private groups that let you use a Facebook-like interface to share photos, links, and status updates.

The Fridge aims to be the perfect service to share a bunch of party photos with only your fraternity brothers, or share stories with only the friends you’ve invited to your wedding, or plan a trip with only your hiking buddies (you get the idea). The whole site is focused on privacy, but you won’t find an array of dials that let you fine-tune which of your twelve buddy lists you want to show a certain photo to. Instead, The Fridge is built around private groups — if you’re in a group you can see everything everyone else in the group shares (you don’t have to ‘friend’ each individually). If you aren’t in a certain group, you won’t even know it exists.  It’s all-or-nothing, and that isn’t a bad thing.

Creating a group is painless: Enter your email address, name your new group, and distribute the private link to each person you’d like to invite. Group creators have some administrative control (you can boot people and disable the private invite link if it gets shared too broadly) but beyond that you don’t have to do much to manage your group. 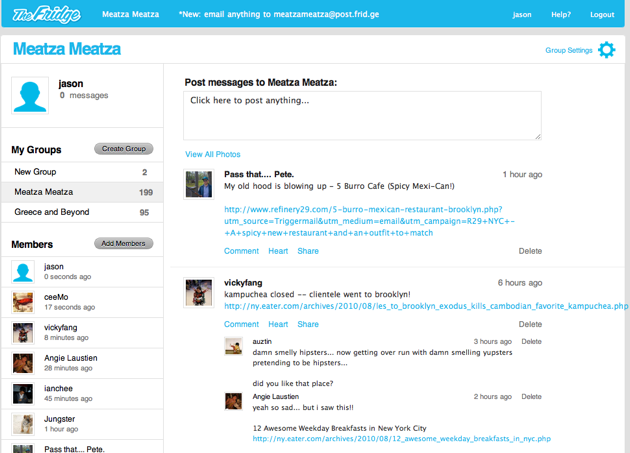 Once you’re actually in a group, the experience is similar in some ways to Facebook’s core functionality. You can post photos and status updates using a publisher at the top of the screen, and your friends’ recent updates will flow down the page in a stream. Clicking on a member’s icon will take you to their profile page, which has a list of their most recent updates (it also tells you who invited that person to the group). You can see a full list of group members at the left hand side of the screen. You can join more than one group, but each is kept totally separate from the others (you navigate between them in the left sidebar).

Cofounder Austin Chang says that The Fridge’s long-term vision is to build a social graph that in’t based on 1-to-1 connections (as Facebook’s is), but rather is focused on interests and the connections between the site’s groups. Building this social graph won’t be any small task (The Fridge will need to do extensive analysis to determine how each group relates to a given interest, for example), but it’s a compelling idea.

The Fridge has some clear benefits — it’s cleaner and more fun than some of the more traditional online groups sites like Yahoo Groups (though its competitors are more mature). And it gives you a chance to interact with your friends in a secure group setting, assuming your friends don’t invite anyone else to join.

That said, the site isn’t exactly welcoming to new users. If you visit the site right now without being invited to any of yours friends’ groups, then your only option will be to create a a group and try to get your friends to join. And the site doesn’t have Facebook Connect (Chang says some users were getting wary about accidentally sharing their Fridge content to Facebook), so there isn’t an integrated way to blast invites to friends (though it isn’t exactly difficult to shoot them an email or Facebook messages).

Along with major sharing hubs like like Yahoo Groups and Ning, other sites that focus on selectively sharing your media include rrripple and Multiply. It’s also worth noting that during a recent presentation Google’s lead user-experience researcher Paul Adams detailed a sharing model that shares similarities with The Fridge, where different content is shared with different spheres of your friends. It’s possible that Google’s upcoming social network, rumored to be called Google Me, will use a similar model.